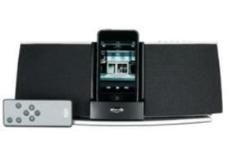 Our cup runneth over with Klipsch iPod docks. Not content with giving the iGroove HG the once over earlier in 2010, the firm now offers the new iGroove SXT. For the same price.

We were very much taken by the HG; a hefty dock capable of a room-filling sound. The SXT (which replaces the £80 dock of the same name which we tested in 2008) looks more refined.

Its silver ‘accent' makes for a smarter finish than the HG, and it's less fiddly and more compact, too.

The remote – a slight bone of contention with the HG – is more workmanlike but better for it. The design is plain but the unit does as it's told without issue.

Compatibility and balance
Round the back you'll find an auxiliary input for connecting any other portable media device and an S-Video output for sending video content from an iPod or, indeed, an iPhone.

It doesn't offer the weight and bass power of the significantly larger HG model but in return you get a better-balanced sound with crisp, clean drums and open, detailed vocals.

There's still bass extension when it's called for and while it may not boast the warmth of the HG, it's lighter on its feet and speedier.

So which should you buy? Well, either. For a more refined style and sound, we'd plump for the SXT; for a livelier, room-filling sound, the HG might be better.