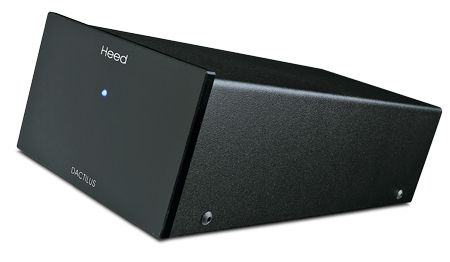 Lots to recommend it, but the Heed just doesn’t seem all that enthused by the job it’s doing

‘Dactilus’ sounds rather like an exciting-looking dinosaur, but it turns out to be an entirely unremarkable-looking digital-to-analogue convertor.

In fact, this particular Dactilus is the third incarnation of the only DAC in Heed’s product catalogue. It’s set apart from its predecessors by its new analogue buffer amp stage (which minimises cable and/or amplifier interference) and its asynchronous 24bit/192kHz type-B USB input (previous Dactiluses got by with just optical and coaxial sockets).

It’s also designed to work in tandem with Heed’s Q-PSU power supply (£350), offering an upgrade path for those who might want it.

As the picture makes plain, there’s very little going on across the fascia here – there’s a tell-tale light to indicate the Dactilus is powered up, and that’s it.

Connected via USB to our reference MacBook, though, and with a WAV file of Róisín Murphy’s Overpowered piped in, you’re left in no doubt that the Heed is doing its thing. Its presentation is a mile away from the sound of a MacBook connected directly to an amplifier.

Heed Audio Dactilus 3: Performance
It doesn’t deliver as widescreen a sound as its Arcam rDAC Wireless or Musical Fidelity M1DAC rivals can generate, but it separates and focuses really well, describing an easy-to-understand picture of instruments’ relative positions on the stage and giving them plenty of room to breathe.

This trait is particularly pronounced through the midrange, with Murphy’s voice granted space even as it is neatly integrated into the performance as a whole.

There’s plenty of detail retrieved, adequate dynamism and a winning sense of coherence to the way the Dactilus 3 performs. What’s lacking is the last word in vitality – there’s a matter-of-factness, a slight lack of engagement, in the way the Heed delivers music.

No matter how gung-ho or abandoned the recording, the Dactilus 3 serves it up with restraint. But that’s a minor gripe, to be honest.

In the right system (something with feral levels of attack, ideally), the Heed makes absolute sense. Otherwise, it’s just a bit too pedestrian to secure the full five stars.

Read all our DAC Best Buys