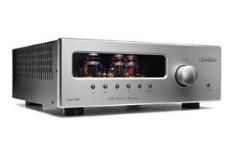 Graaf's GM50 isn't exactly what we'd call a visual stunner. True, its internals are beautiful and build is good, but from the outside it looks kinda drab.

Factor in a cheap-looking remote handset, and you wonder why we've lavished five stars on it. The answer is simple: once you've plugged it in, you'll never, ever want to turn it off.

Ugly duckling is a musical swan

This amp performs immaculately regardless of partnering equipment. Most valve amps would curl up and die when faced with driving the £8800 Wilson-Benesch ACT speakers to high volumes, but not this. And it makes the ACTs deliver deep bass louder and truer than just about any speakers we know. That's even true when playing Red Hot Chili Peppers' version of Higher Ground, with its sledgehammer basslines.

Yes, it's happier filling a smaller or medium-sized room, and don't even think of putting it in an enclosed rack or cupboard as it needs plenty of ventilation. No matter, we still love it to bits.

The GM50 is one of the best amplifiers we've ever tested, capable of serious sonic magic. If you can afford it, we'd urge you to try it – and keep telling yourself that it's the sound that counts, not the looks.