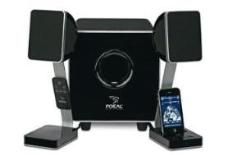 The XS is very good, but with tighter bass control the Focal XS could be a class-leading system

No doubt about it, the Focal XS certainly looks the part on your desktop. The two satellite speakers are slim and elegant and the subwoofer, while slightly less visually appealing, can of course be hidden under the desk.

In specification terms, too, the XS promises plenty. The sub houses 2x30W of power for the speakers and 70W for itself; one speaker incorporates an iPod dock, 3.5mm input and mini-USB socket; and digital-to-analogue conversion is handled by Burr-Brown components. When computer and iPod are attached, a 'sync' button offers iTunes synchronisation.

Playing an Apple Lossless file of PJ Harvey & John Parish's Sixteen, Fifteen, Fourteen via the iPod dock, the XS sounds rapid and well controlled. The highest frequencies wouldn't benefit from being any harder, but they're substantial with fine tonal variety.

Laptop audio also impresses
The story is much the same when listening via a laptop. The XS sounds much more agreeable when receiving information from a computer via USB – the Focal DACs are far superior to those in any laptop we've heard. Again, the speed and attack of sound is occasionally thrilling.

The subwoofer, though, sounds a bit portly and a lethargic – it's not short of punch or depth, but the lack of rigour where trailing edges of bass notes are concerned means it can sound estranged from the rest of the system.

A little more low-end discipline and the Focal XS could win an unreserved recommendation – as it stands, try before you buy.