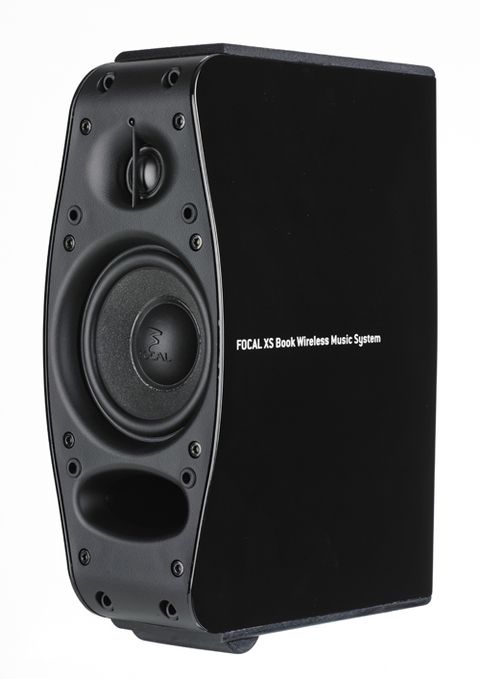 A thoroughly listenable set of desktop speakers with stacks of detail and Bluetooth convenience, if not the last word in excitement

Focal’s commitment to audio outside of dedicated hi-fi has grown in recent years, and the Focal XS Book Wireless desktop speakers are the latest addition to the company’s more multimedia-focused product range.

In essence they’re a pair of the original Focal XS Book speakers launched in late 2011. Except this time, they come bearing aptX Bluetooth for wireless playback.

The design, both inside and out, is therefore almost entirely the same as its predecessors. The same tapered look remains, as do the 19mm aluminium dome tweeter and 10cm polyglass mid/bass driver found in each speaker, and the 20W-per-channel amp residing in the right master speaker.

Their size is still a consideration. They tower over the majority of desktop speakers, and not all spaces will be able to make room for them. They just about hit our limit as to what size that we’d be happy to have sitting on our desks.

Their tapered shape raises a few questions as well. Sitting on that rather thin base at the height they are leaves them feeling a little unstable and prone to tipping over if nudged. These definitely want a solid desk or shelf as their home.

A rubber power button sits atop the right hand speaker, and doubles as the volume control. Connectivity-wise, and alongside the wireless Bluetooth, you can hook up digital sources such as laptops or smartphones using the 3.5mm input. Analogue sources like CD players can be connected to the RCA inputs.

As you might expect, the Focal XS Book Wireless retain a very similar character to their predecessors when using a wired connection. There’s a great sense of scale here, and a good stereo spread. It all does a grand job of filling our reasonably sized testing room with big, detailed and accurately placed sound.

Play Paloma Faith’s Blood Sweat & Tears and there’s a listenable quality to the Focals that immediately draws you in. Paloma’s powerful voice is placed front and centre, with clarity and depth, and there’s a clear, controlled treble, that never sounds harsh or forced.

That said, bass junkies will certainly feel something missing in the balance of the XS Book Wireless. Bass is there, but it’s subtle rather than authoritative. Without that weight in the low frequencies, tracks can feel a little insubstantial when compared to speakers such as the similarly priced Ruark MR1s, for example.

The Ruarks also challenge the Focals in the rhythm department as well. They feel lively, throwing themselves behind a piece of music with excitement and enthusiasm, whereas the XS Book Wireless speakers feel just a touch sluggish in comparison.

Stream music from an Apple MacBook using the aptX Bluetooth connection and, despite aptX’s claims of near CD-quality playback, there is a drop in quality from the wired connection – something we’ve come to accept in exchange for the convenience of wireless playback.

Their character remains largely the same and the soundstage respectably sizeable, but it does introduce a slight edge to the treble, which could be smoother at higher volumes.

It sounds a little more dynamically reigned in, too, but there’s still a performance to be had here that you wouldn’t traditionally expect from a pair of desktop speakers.

That said, since the original Focal XS Books arrived, we’ve seen some great steps forward in desktop audio. Though the originals were a five-star product, simply adding wireless connectivity to a 2011 product seems like a missed opportunity for new innovation on Focal’s part.

These are still good speakers, and the addition of Bluetooth only widens their appeal, but there’s some real competition for them at this price point now, which means they just fall short of the full five stars.