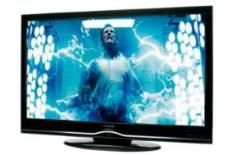 We’re struggling to find too much to recommend about this Finlux set. Simply put, your money could be spent better elsewhere

Finlux is a new brand to us - and indeed to these shores. The first TVs manufactured under the Finlux brand originated back in 1964, since when the name has been owned by Nokia and Hong Kong based company Sen-Tech among others.

Since 2006 the brand has returned to its original home in Finland, and now some six models from 19-42in are available in the UK through Euronics.

First impressions aren't great
It's one of the slimmer, lighter sets we've tested, and makes for a fairly easy on the eye package, though there's perhaps a greater feeling of black plastic with this set than most.

First impressions are not great. Why, for example, on the remote control, is there a circular piece of nothingness where the 'enter' button should surely be? Then, once we switch the set on, we find fault with the archaic on-screen menus. Still, we press on regardless.

Sadly the digital tuner is similarly reminiscent of TVs gone by, proving fuzzy, soft and noisy. The backlight isn't entirely level, either, which is never the most inspiring sight. Still, the level of detail is okay. and the overall balance of colours is fairly natural, if a little two-dimensional.

Switch to the Blu-ray of The Shining and despite the improvement in source material, there's still little to get too excited about on screen. Noise and a lack of detail are the main issues, but scratchy, lightweight sound doesn't help either.

We take no pleasure in dishing out relatively scathing reviews at any time; but if it means you, the reader, avoid spending hard-earned cash on substandard kit, then it has to be done. This is one such instance.

Listen to our March 2009 TV Supertest podcast to find out more about this TV.