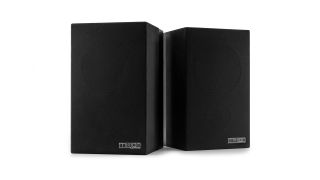 Back in the early 1980s, Mission was a young, fast growing and fiercely ambitious company. While it had just launched a turntable, arm, cartridge and an amplifier in a short amount of time, speakers remained its core business.

The original Mission 70 was an early attempt at a budget box. Surprisingly, considering Mission’s form at the time, these standmounters disappointed thanks to a mediocre, congested performance and insubstantial build. The comparatively poor reviews that followed didn’t help sales either.

Little more than a year later, the MkII version was launched, and even though it shared the same model number and clamshell appearance, pretty much everything was changed. There was a stronger, more rigid cabinet, a new Mission-badged 18cm paper cone mid/bass unit to go with the 19mm Vifa dome tweeter and revised internal cabling linking to an uprated crossover network. The result from all this work was a sonic transformation – in 1983, the 70 MkIIs became one of the budget class leaders, and all for just £89.

Today, it’s the unusual construction that grabs our attention. The cabinet is made in two halves, and is held together by the four screws visible on the back panel. Take the 70s apart and it’s clear that these are relatively simple beasts. The crossover is mounted directly on the back of the single-wire terminal panel rather than on a separate board, which not only kept costs down but helps performance thanks to a more direct signal path.

The drive units on our three-decade-old samples still look in good condition and work well. These Missions were an early example of the brand’s now trademark arrangement of putting the tweeter below the mid/bass driver.  Even current Mission designs such as the award-winning Mission QX-2 speakers stay loyal to the inverted layout because of the claimed advantages of integration and time alignment it brings.

Unlike most modern speakers, the 70s are a sealed box design, so there’s no reflex port to help tune the low frequencies. While this has an impact on low-end weight and power handling – the Missions are rated for amplifiers up to 60W – such a design also has benefits in terms of bass timing and agility.

We aren’t sure what to expect when we connect up the Missions. Speakers have advanced a lot over the years, becoming cleaner, less distorted and more detailed. It turns out we needn’t have worried, the 70MkIIs still shine, delivering a performance that in some ways impresses even today.

However, they aren’t perfect. Put them up against any good current budget speakers, such as the Dali Spektor 2s or the Q Acoustics 3010is, and it’s obvious that there are shortfalls in sonic precision and absolute detail levels. The newer speakers go louder, and despite being notably smaller than the 35cm high Missions, dig into the lows with far greater punch and authority. They have a degree of composure and control that the old timers just can’t match.

But the Missions have considerable strengths of their own. The 70s still sound impressively fast and fluid. They deliver low-level dynamics with considerable skill and render voices with clarity and articulation that still pleases.

Positioned a little out into our test room and firing straight ahead rather than aiming at the listening position, the MkIIs deliver an expansive stereo image. It’s large and spacious, filling the space between the speakers effortlessly. It’s a fairly stable image too, and nicely layered with it.

Tonally, these Missions sound just a touch forward at high frequencies but have a sense of solidity and body through the midrange that we enjoy. We listen to Nick Cave’s Push The Sky Away set and the Missions do a wonderful job with Cave’s gravelly vocals on the title track.

The 70s set the mood beautifully, carrying the steady, pulsing momentum of the music very well. There isn’t the low-end extension or weight we would now expect, but the Missions have enough in the way of authority higher up the frequency range to sound balanced.

We switch to something more upbeat in the form of Beyoncé’s All Night and the MkIIs deliver a good dose of rhythmic drive and have the dynamic freedom to render the horn section with enthusiasm. They sound lively and exciting, and have the knack of making us forget about hi-fi and concentrate on the music instead.

Sometimes when we listen to products from previous decades we come away a little disappointed. These once revered components sometimes just don’t stand up in current terms and it’s hard to understand why they were so venerated in the first place. These Missions aren’t like that. Nearly four decades on from launch they continue to sound as musical and entertaining as ever.

Sure the best current speakers are easily superior when it comes to tonality, detail and precision, but listening to the Missions we just don’t care. They make listening to music fun, and we can ask for no more than that.