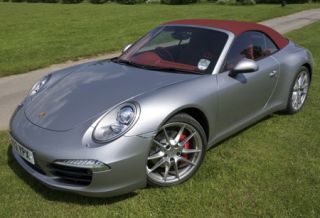 Some will have pockets deep enough to afford a 2012 Porsche Carrera. Others, me for instance, will have to make do with dreams of winning the lottery and flirting with the company’s mind-bogglingly in-depth, not to mention highly addictive car configurator.

Among those many options lie the tick-boxes for choosing an audio system for the Carrera. At £2986, the most expensive is Burmester’s high-end surround sound set-up.

Burmester, you say? If you’re not familiar with the brand, think high-end German hi-fi. This association with Porsche is the equivalent of Bentley and Naim hooking up and has been in place since Porsche introduced a Burmester system to its Panamera and Cayenne ranges back in 2011.

To provide a bit of hi-fi perspective, we recently reviewed Burmester’s 077 preamp and 911 MkIII monoblocs combination (911 shown below); and that comes in at an eye-watering £52,700. Which makes the £2986 asking price for the custom-built Porsche system seem almost reasonable…

So what do you get for your money? Well, the cabin is fitted with a total of 12 speakers, 16 channels of digital amplification (this is a completely active system) and a mighty 821W of power.

The midrange drivers use fibre-glass for its perceived rigidity and stability benefits. High frequencies are handled by Air Motion Transformer ribbon tweeters (AMTs), which use a very thin, pleated foil diaphragm. Burmester claims this allows for a clean, clear and precise sound.

Instead of having its own separate enclosure, the 14cm active subwoofer is fitted to the car’s bodyshell, using the cowl frame (the part which supports the windscreen and dashboard). Burmester claims not only that is this an efficient way of doing things, negating the need for any additional mounts or cabinets, but also that it helps fill in frequencies cancelled out by having the speaker drivers in the door firing towards each other.

I was lucky enough to spend a few days cruising around in the Carrera S cabriolet you see pictured here, and listening to this system. And the first thing that hit me was the bass. Across the board, whether you’re listening to the radio, a CD, or through your iPhone, the default system settings result in boomy basslines that stick out like a sore thumb.

I found you need to dial down each source’s bass setting by three if not four notches to tame it and merge it with the mids and highs.

Sound set-up is similar to that on a flatscreen TV. As each TV input can be assigned its own settings, so each source used in the Porsche can have the sound tailored to suit the listener. Being able to bias the balance of the speakers front to back and left to right isn’t new, neither is the option to tweak bass and midrange settings individually.

The symmetrical function found under the special ‘Burmester’ sound option, however, gives a fine balance from either seat. The Burmester preset also offers ‘Smooth’, ‘Surround’ and ‘Live’ settings if you choose to use them, although we’d leave them off.

The ‘Surround’ mode sounds a little confused to us, and although the ‘Smooth’ setting sounded perfectly ok with highly compressed music streamed over Bluetooth or through the iPod connection, it robs music of some of its energy and vibrancy.

‘Live’ is the pick of these settings. Team it with the Sound Conditioner and the system automatically adjusts its volume to compensate for any outside noise. And things can get quite rowdy in the cabin, especially when you’re pushing the engine and even more so with the afterburners... sorry, sports exhaust, engaged and the top down.

Having the roof folded away obviously makes a difference to the system’s sound. Remove the lid from your listening room and you lose a little of the sound’s solidity and weight. It’s not a total washout at moderate speeds and around town – in fact, it’s the burble of the engine while you’re pootling around that tends to be the main intruder. It’s quite possible that the hard top might just be the more musical machine.

Nevertheless, the Burmester conjures up a terrific stereo image for driver and passenger alike. Spin Emeli Sandé’s Heaven and vocal sounds direct, while there’s impressive dynamic reach for a system of this type.

The expressive, detailed sound continues across the music range. Switch to a classical piece, such as Samuel Barber’s Adagio For Strings (perfect for soothing the senses when you’re stuck in a 10-mile tailback) and there’s a decent flow to the piece. Strings sound taut and crisp.

At the heart of the car’s entertainment system is the PCM (Porsche Communication Management). There’s a seven-inch, touch-sensitive, WVGA screen. It’s easy to navigate and more responsive to your prods than other systems I’ve had the pleasure to try out.

An auxiliary USB input can be found in the glovebox. You can plug your iPhone or iPod in here and can then navigate through the Porsche’s touchscreen, searching by the usual artist, album, etc.

If you need to scroll down a huge list of artists, the PCM makes short work of it: hold your finger down and you go from scrolling down one track at a time to one letter of the alphabet at a time, so you can make the otherwise painstaking journey from Adele to ZZ Top in just a few seconds.

You’ve been able to make hands-free calls over Bluetooth in Carreras before, but this is the first time you can stream music over the same system. Once your phone is paired, select Bluetooth as your audio source from the on-screen menus and hit play.

This is good news for those who want to stream Spotify playlists from their Android, iOS or Windows Mobile smartphone. The quality isn’t quite up to a wired connection over the car’s USB input, but it’s convenient, especially if your passenger wants to stream from an offline Spotify playlist.

If you’re feeling the Burmester route is a little too pricey there’s always the £963 BOSE Surround Sound System with its 12 speakers, active subwoofer, eight-channel amplifier and 445W of power. Or you could make do without a branded system and maybe just opt for a six disc CD/DVD autochanger.

But, then, if you’re considering a Carrera, the price of a few extra options aren’t going to be high on your list of worries – our test car was £102,634 with all its various bells and whistles added.

We’d certainly make sure this Burmester system was on our options list.

MORE: Apple CarPlay - everything you need to know