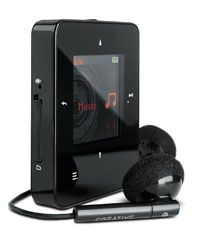 A neat ultra-portable player that packs plenty of punch

Before Apple’s iPod upset the apple-cart, Creative bossed the MP3 player market. And the company is still ticking over very nicely, building portables, speakers and more.

Twenty hours of battery life on a full charge, support for the usual selection of formats and a voice recorder are the other vital statistics.

A 1.45in TFT screen looks the part, but is tricky to read from certain angles. Touch controls are fairly effective but it does collect smudgy fingerprints as if its life depends on it.

The earphones steer admirably away from brightness – to the extent that, in fact, they can sound a touch woolly.

The M100 itself could sound cleaner across the tonal spectrum but there’s admirable thud and weight, and decent insight. It’s worthy of a spot on your shortlist.