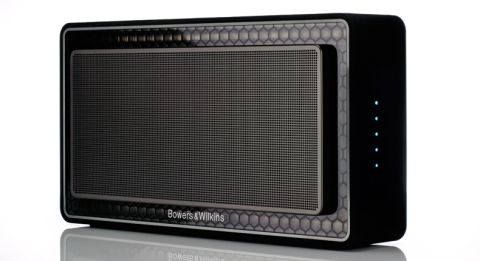 Looks good, sounds great – a portable speaker that’s worth paying the premium for

It's almost a surprise that a speaker company as renowned and popular as Bowers & Wilkins doesn't already have a Bluetooth speaker in its increasingly broad range of products. Well, now it does - and it comes in the shape of the B&W T7, its first portable, Bluetooth wireless speaker.

B&W is a brand that is well aware of its revered status in the hi-fi world – and keen to maintain that position – but is nevertheless happy to move with the times.

So, while continuing to focus on its bread and butter, turning out consistently good (and some exceptional) hi-fi stereo speakers, B&W was quick to join the iPod dock and then wireless speaker markets: showing, as it did with the B&W P7 headphones, that the company could successfully turn its hand to variations on its core business.

The Zeppelin iPod dock was one of the first great 'hi-fi' iPod docks, and the Zeppelin Air, A5 and A7 wireless AirPlay speakers led the way at one time or another in their respective price categories for Apple users wanting wireless music.

Now, the T7 wants to do the same for portable Bluetooth speakers, opening B&W up to a whole new audience of Android and other device users (and of course Apple as well).

The T7 speaker looks like a B&W product. Despite being a slight variation on a fairly familiar rectangular wireless speaker design, there's a premium look and an obvious design flourish that helps set the speaker apart.

This is mainly thanks to the Micro Matrix design, which makes for a transparent frame around the main bulk of the speaker, creating a neat honeycomb effect. This Micro Matrix is designed to improve the sound by making a solid, resonance-free structure; it also looks smart, twinkling when it catches the light, while also helping the T7 blend in cleverly with its background.

At 950g, it's light enough to be portable and fit in a bag no problem, but still feels more solid and robust than you might think when you first pick it up. The rubber trim around the top, bottom and sides make it easy to hold and offers a little protection.

And it might need it: while it's stable enough on its 4cm base, it will wobble given too strong a prod. It probably wants to be tucked a little out of the way, therefore, and - if you're in the garden or the park - it will need a relatively flat patch of ground to be placed on.

On the top edge, you'll find four control buttons (which, being quite stiff, do need a decent prod on our brand new sample), allowing you to pair, play/pause, and adjust the volume up/down. There's a blue LED to one side, which shows when you're paired, too, while the power button is tucked away on the bottom right edge.

Aside from the buttons being quite rigid, we'd also say they're not particularly easy to see. It makes for a sleek design but means it did take us a while to find the power button. That said, it won’t take you long to get familiar and you don’t tend to need to press the buttons on the wireless speaker too often, anyway.

Around the back there's a power socket, auxiliary input for non-Bluetooth devices, service port and a reboot button (we didn’t have to use it, thankfully). There’s no USB connection for charging your device as you find on some rivals, but we think that’s very much a bonus rather than a necessity.

B&W told us the aptX Bluetooth codec was a crucial factor when it came to ensuring the T7 could achieve the wireless Bluetooth sound quality the company wanted from the speaker, so that’s present and correct.

Connect an aptX-compatible device and you’ll get a pop-up telling you it is enabled. Connecting proved painless: we connected a variety of Apple and Android devices no problem, as well as a MacBook Pro. Bowers & Wilkins has even gone to the trouble of making its own “audio cues”, working with composer Mira Calix to put their own stamp on the Bluetooth experience.

You can double-tap the play button to skip on a track, while a press of the power button reveals a set of LED lights on the side; these indicate how much juice the T7 has left in the tank.

B&W claims 18 hours of playback (75 per cent volume, rock music) – but suggests you should get noticeably longer, anything up to 40 hours, at lower volume and/or with speech radio. We enjoyed more than 24 hours music playback, no problem.

The specs are solid, the features more than sufficient. But what really matters is the sound quality. And, even with our expectation adjusted for this sort of product, at £300 it needs to be good.

The Cambridge Audio Go at £100 provides an impressive entry-point, while the likes of the Loewe Speaker2Go and the brand new Bose SoundLink III provide more price-comparable rivals that the T7 will need to beat.

It Ain’t Hard To Tell from Nas’s remastered Illmatic XX album has a solid, punchy bass that gets your head nodding, plus clear vocals to help deliver an open, relatively spacious sound from a small speaker. Instruments sound natural and realistic, with impressive dynamics ensuring notes stop and start punctually, helping to give the sound plenty of attack and rhythm.

Funky blues tunes have their groove intact, and it delivers subtle detail with ease. Clarity and detail go hand-in-hand, and the amount of information revealed by the T7 is astonishing for a speaker of its kind.

Play Bob Marley’s Waiting in Vain and though some rivals might deliver more bass, it won’t sound as tight as it does on the T7. There’s little loss of composure at loud volume, which is impressive for a product of this type.

And it does go pretty loud. Although it might not fill the room as generously as the Libratone Zipp BT or Loewe Speaker2go which go louder and sound a bit bigger, they don't sound as organised and musical as the B&W speaker – and this is only more apparent at loud volume.

Play something a little brighter and edgier, such as Metallica’s Until It Sleeps from the live S&M (Symphony and Metallica, kids) album, and the T7 can sound a little sharp at loud volume to sensitive ears.

But if you value sound quality - as of course we do - and you’ve got the budget for it, this really is money well spent.

The T7 looks the part, does everything you’d expect a Bluetooth speaker to do, and sounds comfortably better than any such product we’ve heard. Bowers & Wilkins has entered the market in style.