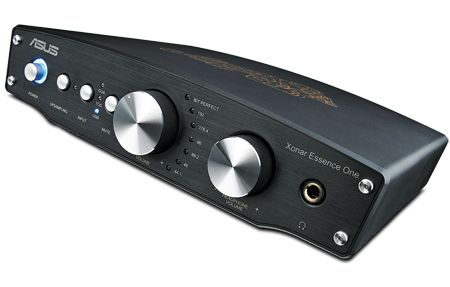 Not without charm (or merit, for that matter) but not what we’d call a complete product

Asus is better known (to us, at least) as a purveyor of superior PC-based equipment (the oddly named Eee Pad Transformer Prime Android-operated tablet recently received a wildly enthusiastic five-star review), but the Xonar Essence One is a bridge between computer and hi-fi.

It’s a DAC and a headphone amplifier, and what’s more it appears to have a very fetching tattoo on the top of its casework.

Underneath that design frivolity, though, the Xonar Essence One is all business. It has the usual digital coaxial, digital optical and asynchronous USB inputs, but alongside stereo RCA outputs are balanced XLR outputs too – so the Asus will pair with more rarefied amplification.

Asus Xonar Essence One: Performance
Powered up, with a 192kHz file of Kate Bush’s Among Angels fed in (and our gaze averted from the rather piercing blue fascia lighting), the Asus is a vigorous and cheerfully up-front performer.

This is a spare, nuanced piano-and-voice recording, but the Xonar Essence One is constantly nagging at it, constantly seeking to drive it onwards and crowd the front of the soundstage.

On the plus side, that makes for impressively positive entry into and exit from individual notes; on the downside, it simply doesn’t suit the recording.

Switch to an iTunes-derived 256kbps copy of The Smashing Pumpkins’ Quasar and the Asus is far more at home. Fast and attacking, with good midrange detail on display, this is a DAC that grabs recordings by the scruff of the neck and gives them a friendly shaking.

A lot of detail gets lost in the rush, mind you, and there’s coarseness at either end of the frequency range, but if it’s excitement you crave, the Asus has got it in spades.

Asus Xonar Essence One: Verdict
So is it worth the £350? Those individual looks are likely to sway some otherwise-undecided punters, and that constant ‘party-on’ attitude (plus the headphone amplification that’s remarkable in its similarity in sound to the DAC), makes the Xonar Essence One a diverting option. We require a little more refinement from time to time, though.

See all our DAC Best Buys