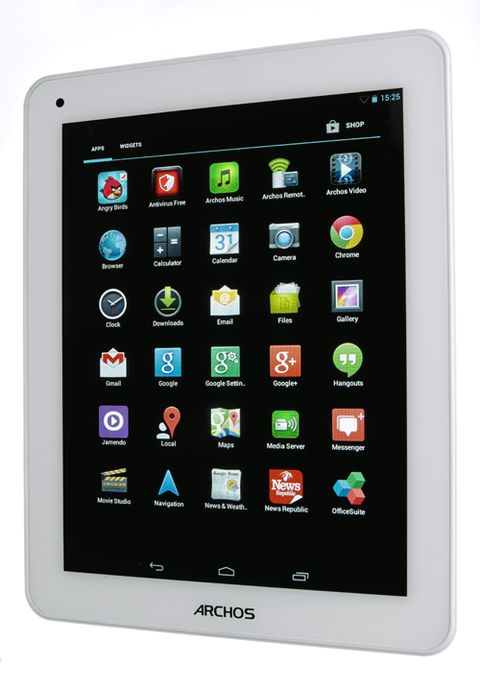 At its price, this Archos has competition too good for it to be this bad

In an increasingly competitive market, tablet manufacturers can’t afford to drop the ball.

And while you could forgive the Archos 80b Platinum its shortfalls if it was a sub-£100 budget slate, at £170, there are more questions to be asked of it.

While its spec-list, with its aluminium chassis and 1.6GHz quad-core processor, might sound like a promising iPad mini alternative, start using it and the disappointing reality sets in.

For a start, its 8GB of on-board storage is an immediate issue for power users, particularly when there’s only just over 6GB left once the operating system has taken its share.

It is expandable via microSD card, but it’s worth remembering that Android doesn’t currently allow apps to be stored on an external memory device, so it could be more limiting than you think.

At 440g, the 80b Platinum is heavy compared with the 290g Google Nexus 7 and the 331g iPad mini 2 with Retina display, putting it more on par with full-sized tablets.

Its rough-finish aluminium casing also manages to feel cheap rather than premium, particularly when you notice the plastic buttons and open ports along the top edge. This includes its proprietary charging port – there’s no handy micro-USB charging here.

The 1024 x 768-pixel screen has one of the lowest resolutions we’ve seen on recent tablets.

It looks grainy even compared with budget tablets like Tesco’s Hudl (which, ironically, is made by Archos), and its backlight is so weak that using it outside is quite tricky. And while no tablet is truly fingerprint-proof, the 80b Platinum seems collect more than most.

But let’s look at what it does well. Its quad-core processor does a good job of keeping things smooth, launching apps reasonably quickly and letting you swipe between menus without any noticeable lag. Zooming in on web pages can be somewhat jerky though, with text taking a moment to refocus to its new frame.

Watch an HD video clip in the stock Android player (don’t even bother with Archos’ pre-installed video app, it has a tendency to crash. A lot.), and there’s an instantly noticeable lack of detail compared with the Nexus 7.

Colours have fewer shades, movement feels less than smooth and blacks, while dark, lack the detail to have true depth. Whites could be brighter too. They don’t punch through in darker scenes, while thin lines are prone to instability that makes them appear to flicker.

YouTube clips are on the fuzzy side too, even on the high quality setting. That isn’t helped by the Archos’s low-res screen, but can be mitigated by using the tablet’s Micro HDMI output to hooking it up to your TV and playing your content there.

Plug some headphones into the Archos, and music lacks the scale, warmth and overall detail you can hear in something like the Amazon Kindle Fire HDX 7.

There’s decent rhythmic ability here, and tracks hold together well, but it’s missing the light and shade needed to prevent it from becoming a tiresome listen. It’ll go loud, but it seems to shout music at you rather than conveying it in the way it’s intended.

Listening without headphones isn’t any better, with one speaker on the left hand-side of the tablet serving as the sole audio output. There’s little bass to speak of, but the midrange isn’t too bad – vocals in music and dialogue in movies can be heard with reasonable clarity.

Of course, very few tablets have speakers of note, but stereo speakers would’ve been nice here.

Finally, there’s the so-so 2-megapixel camera. There’s no tap-to-focus or image stabilisation, so images come off soft, lacking detail and blurry – especially in low light. The same goes for the front-facing webcam – it’ll do for Skype calls, but make sure you’re well lit if you want your Skype to see you…

This tablet has many flaws, some of which could be overlooked if it was a lot cheaper. The £50-cheaper Tesco Hudl roundly outperforms it, and you can get the exceedingly better Nexus 7 for just £30 more. In this fiercely competitive market,

Archos simply must do better than the 80b Platinum if it’s going to succeed. Disappointing.