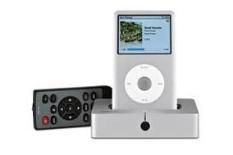 This sort of iPod dock is a little scarcer than the ubiquitous iPod speaker dock. Tending towards the premium end of the market, the Arcam irDock naturally requires amplification and speakers, or a pair of active speakers. It's not a standalone product, but it's the ideal way to add an iPod to a hi-fi system.

And we say ‘iPod' deliberately, for despite being an upgrade on what was an Award-winner last year, this Arcam doesn't have ‘Works with iPhone' certification, which is a shame.

You can access your iPhone's music, but if you want to avoid intermittent phone interference you'll have to go into airplane mode, which turns off the phone bit of your iPhone.

Keep an eye on the remote
Replacing the rDock, the key difference with the new irDock is the addition of a tiny remote control.

Arcam clearly thinks a small product requires a small remote and we don't necessarily disagree, even if it is easily lost. Still, we managed to negotiate the tiddly keys, which allow full control and are intuitive to use.

Not a new feature, but a neat one, is the ability to turn off the dock's charging function. We're led to believe it's no good thing to have your iPod constantly charging – if it's already on full charge it's wasteful anyway – so we welcome this function. You'll find S-Video and composite video outputs, too.

Sonically it's not a massive jump in quality over the old model but it's detailed, dynamic and demonstrates capable timing.

The Onkyo ND-S1 digital dock would certainly give the irDock a run for its money – being less versatile and requiring a DAC you might expect that – but if you're after an analogue iPod dock, Arcam's offering is still your best bet.

See all our iPod dock reviews