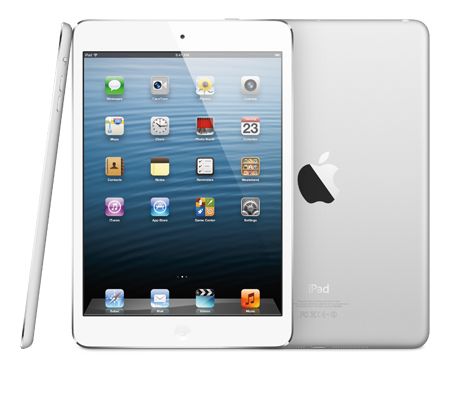 You have to pay a premium, but the iPad Mini feels and performs as it should

Surprise, surprise. It was really only a matter of time before Apple launched its own pocket-sized version of the iPad: the iPad Mini. After all, the company couldn’t just stand by and let Google, Amazon and the rest have all the fun.

Apple has had four generations of working on the regular iPad to come up with a smaller version, and the result, while not groundbreaking in specification, most definitely looks the part.

Free the iPad Mini from its plush packaging and initially, you’re not quite sure what to think. Critics say it looks like a jumped up iPod Touch, and we’re inclined to agree. But is that a bad thing?

Like the Touch, the Mini, clad in its aluminium finish, feels like a quality item. We’d even argue the finish is even nicer than that of the standard iPad, which can’t be a bad thing. In terms of weight, the Mini feels nigh-on perfect: not so heavy that it lacks portability, and not so light that it feels flimsy. Everything about its build is right in the Goldilocks zone.

There are also a couple of subtle distinctions to the chassis that set it apart from Apple’s larger device. Instead of having the iPad’s one-piece plastic volume control, the Mini’s is split into two distinct aluminium buttons for up and down. Above these is the small switch for locking the device (shown above).

Our review sample was the sliver-and-white version, although black-and-slate is also available, and is similar to the finish offered on the iPhone 5. Whether it’s going to be susceptible to scratches and scuffs (as some have claimed the iPhone 5 to be), only time will tell.

While many rival tablets sport a 7in screen, Apple has opted for a slightly larger 7.9in display. The extra size means your hand needs to stretch a little further to wrap around the device, but we wouldn’t consider this a stretch too far.

You really feel the benefit of the larger screen when browsing the web in landscape mode – there’s great deal more of the page on display than when you’re viewing the same one in landscape on, say, a Google Nexus 7.

The thin bezel also gives a neater and more spacious feel. Watch a movie, though, and the Mini is still optimized for 4:3 content, which means letterboxing: black bars top and bottom when you’re holding the tablet horizontally.

The Mini’s resolution matches that of the old iPad 2 – 1024 x 768 pixels. This looks a little low compared with the higher-res screens of rival tablets (the Nexus 7 is 1200 x 800) and you can see the difference when looking at the home screens of the relevant devices – but this doesn’t automatically mean that video playback suffers.

Play some video and the iPad Mini produces a stupendously good image. A quick Blast of the Avengers Assemble trailer streamed via iTunes sees the Mini serve up lashings of detail. The texture to Thor’s outfit boasts a breathtaking sense of realism, and the glossy picture shows an impressive sense of depth.

Contrast is a particular highlight with punchy, brilliant whites contrasting with rich blacks. Colours are vivid too, without appearing overcooked. Hulk’s green complexion and Iron Man’s red and gold suit are judged perfectly, as are skin tones. We can only imagine how this would look on a Mini with a retina display!

There’s a speaker positioned either side of the Mini’s Lightning connector (below). As with all tablets, they’re not designed to go crazily loud, but then again, they’re not disgraced and are listenable enough, albeit in short bursts.

Attach a pair of suitable headphones (we tried both Beyerdynamic DTX 101iEs and a pair of Philips M1s during our test) and the iPad produces a dynamic, engaging and hugely listenable sound.

Play Calvin Harris’ Sweet Nothing and the Mini equips the tune with a solid, well-defined bassline, while Florance Welch’s vocal sounds dynamic and exciting. The Mini does a great job of keeping time to the tracks fast pace.

When it comes to app use, multi-tasking and web-browsing, the Mini is one of, if not the most accomplished. The tablet supports dual-band wi-fi and uses the same A5 processor used on the iPad 2.

And it still holds up well, even against the quad-core-toting Nexus 7. In fact, the Mini was quicker to buffer programmes watched through BBC’s iPlayer on our wi-fi network, and produced a better image.

It also made shorter work of surfing complex websites: during our head-to-head comparison with the Nexus 7, the Mini was consistently quicker to the punch.

Apple’s Mini is one of the few small tablets to have cameras on both front and rear. The rear-facing one is a 5MP iSight camera, similar to the one found on the back of the latest iPod Touch, although the Mini has to make do without a flash.

Still, the quality of pictures in normal light is good, but don’t expect oodles of detail and depth if you’re snapping in dark and dingy corners.

There’s no shortage of add-ons for the iPad Mini, and the first thing you’ll be looking to buy is a decent cover to protect the screen. Like the larger iPad, Apple offers a Smart Cover, but this one does away with the metal hinge in favour of a fabric-covered one (above). It’s a snug fit and lets you tilt the screen for desktop viewing… but you’ll have to pay £35 for the privilege.

If you’re planning to dock the Mini to an iPod speaker instead of streaming wirelessly using AirPlay, the new Lightning connector could prove a stumbling block. Because of the lack of speaker docks sporting the connector you’re going to need Apple’s £39, 30-pin-to-Lightning adapter (although you might also find third-party manufacturers offering them further down the line).

JBL has finally announced the world's first docks with the Lightning connector, the OnBeat Micro and the Venue LT, and the larger Venue LT is the first that will support the iPad Mini.

Getting video from the Mini onto your TV can be done via a couple of different methods. If you buy or own an Apple TV (£100), you can beam content wirelessly using AirPlay. Or if you want to use a wired connection, you’ll need Apple’s Lightning Digital AV Adapter (£39), which allows transfer over HDMI.

When it comes to Apple products, you’re always going to be paying a premium over products that do a similar job. After all, the 16GB Mini costs £110 more than the equivalent Google Nexus 7.

But then again, the Mini looks and feels the business, executes multiple roles with clinical precision and delivers impressive pictures and sound.