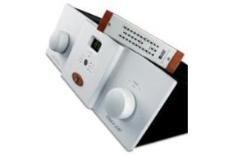 It seems nobody told Unison Research that integrated amplifiers were meant to be convenient. In the Unico 100 the company has created one of the heaviest and chunkiest one-boxers around.

We wouldn't mind so much, but the thing runs pretty warm, too, so you'll need lots of ventilation alongside a sturdy equipment rack and a friend who'll help you hump the thing around. It's just as well we weren't tempted by this amp's big brother, the 200, which is about twice as big and even harder to accommodate.

Power up the Unison and connect it to a suitably capable system, and you'll find the effort more than worthwhile. This Italian behemoth is also one of the most enjoyable amps around. It has a bold, outgoing sound that trades a little subtlety for a big-boned presentation packed full of tonal colour.

Imagine a good television with the colour and contrast turned up just a touch, and you'll get an idea of what this Unico does to the sound.

Solid and full-bodied
The effect may not be wholly natural but, with the right material, the results can be stunning. Listen to PJ Harvey's White Chalk, and it sounds achingly beautiful. Harvey's voice is packed with emotion and the presentation is stable, solid and full-bodied. Many rivals will sound weedy and undernourished in a direct comparison.

There's plenty of refinement, but this Unison delivers it without a hint of the dynamic blandness most other refined amps think passes for high-end sound.

Give PJ Harvey a rest and move onto something punchier, say Eminem's When the Music Stops and the Unico 100 responds with enthusiasm. Here, the amplifier delivers plenty of muscle – no surprise when you consider its 180-watt per channel output – and pleasing scale. You are left in no doubt as to the intent or power of the recording.

Here comes the nitpicking
Putting our nitpicking hats on, the Unico 100 could do with crisper timing and more articulate bass. At times it sounds just a little heavy-handed at low frequencies, which affects agility and articulation. You need to keep these criticisms in perspective, though. These shortcomings aren't massive and they certainly don't stop this integrated amp from being a great listen.

Move away from sound quality and the Unison remains impressive. We like Unison Research's wooden-cased remote, and there's little to complain about in terms of solidity of build or slickness of finish. This is one high-end amplifier that looks and feels as it should.

The features count is decent, too. There's both balanced and unbalanced connections plus a subwoofer output for those who want more bass than their stereo speakers alone can deliver.

The Unico 100 isn't the best all-round integrated amplifier for the money – it needs crisper timing and tauter bass for that. However, there's no denying that many people will love this amp's outgoing character. It's just the thing to give a tired or bland-sounding set-up a real kick.

Give this Unison a listen: you just might love it.