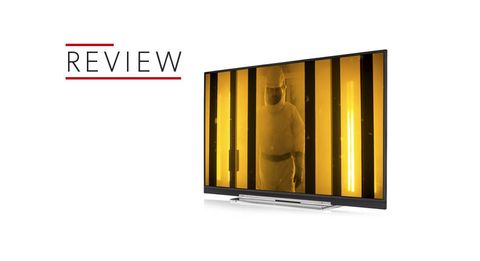 It's a reasonably priced, big-screen 4K telly - and on that basis the Toshiba 49U7763DB doesn't disappoint

Few people would have £650 leave their bank account without noticing, but in terms of 4K televisions of this size the Toshiba 49U7763DB represents a real bargain. In fact, it was over a year ago we last reviewed anything comparable at this sort of price.

So providing it works (and the picture isn’t offensively bad), you might assume this Toshiba automatically gets a decent review. But there's more than minimal expectations being met here – this is simply a thoroughly good TV.

The trend has lately been to almost entirely eliminate the bezel from around the screen, but Toshiba has bucked that by allowing for front-firing speakers across the base of the 49U7763DB. The intention is to make the addition of a soundbar an option rather than a necessity.

It doesn’t skimp on connections, either. There’s even a Scart input, which sits alongside four HDMI and three USB inputs on the 49U7763DB’s spec sheet (and back panel). Of course it has the obligatory ethernet and TV aerial sockets - and outputs for headphones, optical digital audio and a subwoofer too.

The 49U7763DB isn’t the glass pane-thin set we have become accustomed to these days, but at 55mm deep it’s far from bulky.

The stand extends that footprint to 19cm and, with Toshiba opting for a centralised plate design, it won’t require a table-top the same width as the television. Generally it’s a well thought-out design, fit for purpose rather than merely aesthetically interesting.

The only area of build quality we'd question is the remote control. Again it’s a practical design, with nice big buttons - but it is really quite flimsy.

It isn’t all that unusual to find lightweight remotes but, given Toshiba has got everything else right so far, it is a caveat worthy of note.

There are plenty of Smart TV features, including catch-up apps from all five terrestrial channels, and Netflix and YouTube for access to streamed 4K content; it’s a shame Amazon Prime Video is not included, though.

We have the 49U7763DB up and running in next-to no time, and we delve into the picture settings before having a poke around at the rest of its insides.

Thankfully, for those who lack the patience to spend ages adjusting and optimising the picture, there isn’t much tweaking to be done to get a natural-looking image.

We begin with the advanced settings, such as dynamic contrast, off - and by the end of our fine-tuning the 49U7763DB needs only a little assistance with motion and noise reduction to show us its best.

Toshiba’s UI is neatly laid out, and we have no trouble locating the settings and services we need. This can’t be said of every TV we test.

It is quite lethargic at times, mind you, keeping us waiting a few seconds as pages load. But it’s a compromise we’re prepared to make at this price - as long as the picture makes it worth the wait.

Overall, it does. Detail is quietly impressive, the 49U7763DB doing a fine job of upscaling live TV channels to its 4K panel. There’s little discernable graininess, even when watching standard definition content.

In fact, you’d need to spend more than this, or downsize, to get a significantly sharper picture.

Colours, too, are well rendered. Skin-tones look natural, even when set against the gaudiest of daytime TV sets - and while overall the Toshiba’s palette is made up of relatively soft tones, thankfully there is no needlessly retina-singeing brightness.

Motion can also often be an issue for budget TV sets - but even when we test it with a Match Of The Day stream via BBC iPlayer, the 49U7763DB has little trouble tracking the flight of the ball or handling swiftly panning cameras with decent smoothness, neither juddering nor blurring too much detail.

Feeding it a 4K Blu-ray of Deadpool offers an obvious step up in the Toshiba’s performance.

While we're not expecting the sharpest Ultra HD picture, and there isn’t perhaps the most ample detail in the darkest scenes, the 49U7763DB offers a decent chunk of 4K excitement that's more than worthy of the price.

While everything about its performance is pretty satisfactory in context, there is a lack of outright punch to the 49U7763DB’s picture. Colours can be tepid and contrasts undynamic.

Given the choice between an understated palette and an unnaturally aggressive alternative, the former is our preference - but we’d still like colours to pop more. And we want deeper, more detailed black tones against brighter whites.

If you want a big, affordable 4K TV, we have yet to see better value elsewhere. The 49U7763DB is never going to trump the performance of televisions with premium price tags but, for £650, this really is a very agreeable product.

See all our Toshiba reviews