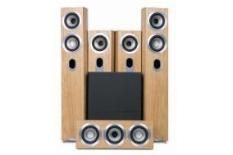 As thrilling or calming as you want it be, this is a sure-footed and convincing set-up

When we first listened to the Tannoy Revolution Signature package earlier this year, we were listening to five-sixths of a system. At the time, there was no dedicated sub in the Revolution range, so the company suggested we use its TS12 sub. Apart from spoiling an otherwise lovely photo with its black finish among all the blonde wood, the TS12 integrated seamlessly into the system.

Tannoy has now introduced a Revolution subwoofer so there's no doubt that visually it matches its partnering speakers far better than the TS12, but it's less expensive – and less impressive. So rather than test an entire Revolution system at £2100, we've decided to use the £2300 package we originally tested.

This is decisively the most compact set-up among its rivals – the DC4T front speakers and DC4 rears, particularly, look Lilliputian compared to others. This is the package that best serves those whose home cinema is a regular-sized room – only the DC4LCR centre channel might be hard to position, as its curvy cabinet makes it tricky to get it firing forwards.

Cohesion and detail
As we noted before, the Tannoy strives for a fast and detailed sound. The centre channel is the first to impress, serving up dialogue in a natural manner, and it's securely sited in the middle of a convincing, roomy soundstage.

Despite their modest dimensions, the Tannoys have plenty of dynamic headroom and, thanks to the TS12, the very lowest sounds are taut, punchy and well controlled.

The Revolution system manoeuvres effects speedily and positions them firmly, and is as capable of creating a sense of dread from the quietest, most atmospheric moments of Batman Begins as it is of propelling you out of your seat with the pace and energy of its attack.

Cohesion around the circle of speakers is the most convincing in the test. They're no less talented with music, producing a totally absorbing sound.

These speakers are the least sensitive in the group test, requiring a bit of a boot up the backside if you're going to enjoy their full dynamism – avoid tentative amps and go for something that can show the Revolutions the whip when need be.