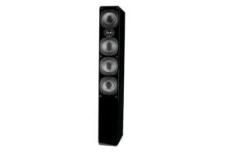 If an enthusiastic, caffeine-rich character sounds like your kind of thing, these Tangents are a good-looking way to get it

As tall, slim and shiny as a supermodel, though nothing like as tempestuous, the Tangent Evo E45s are the perfect product for any television or film set-designer in need of a glossy shorthand for ‘loft-space life-style' or the like.

If your speakers have to reflect the urbanity of your personality, look no further – and the E45s come in a wide range of finishes to match your décor.

They're not quite so prepossessing with the grilles off. There's something undeniably gratifying about the sight of all those drivers, but wise hi-fi heads will know that the more numerous the drivers, the trickier it is to integrate them all.

A song as uptempo and breezy as Mose Allison's Swingin' Machine suits the Evo E45s perfectly.

Dynamically potent performers
Dynamically potent and brimming with enthusiasm and excitement, they need no second invitation to hit the dancefloor – low frequencies are chunky, prompt and tonally expressive, and there's more than sufficient drive and attack in evidence.

Allison's voice, a reedy and approximate instrument at the best of times, is packed with character, and the top of the frequency range is just as assertive as the bottom.

Upfront and exuberant
There's an undeniable suggestion of relentlessness about the Tangents' steroidal levels of attack, though, which, curiously, is made more apparent when playing a more considered, middle-of-the-road piece like Paul Simon's Still Crazy After All These Years.

The upfront presentation veers uncomfortably close to hectoring, and treble frequencies gain a rather unyielding, cold quality that becomes more problematic the longer you listen.

And integrating all those drivers is indeed problematic: the soundstage is fractionally muddled compared with the best rivals.

If you value exuberance and excitement above all else, by all means dive right in.