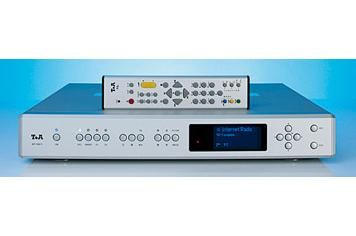 The MP 1260R is a fine product – and points the way to the probable future of hi-fi systems, high-end or otherwise

History shows time and again that specialist hi-fi companies don't like change. It took the specialist industry years to accept CD as viable quality format, and perhaps even longer to acknowledge the importance of the iPod.

But things are changing. The T+A MP 1260R, along with the Marantz NA7004 we reviewed last month, are the early arrivals in what we know will be a wave of audio streaming products from companies more used to making CD players.

What exactly is the MP 1260R? T+A calls it a network client. Still in the dark? Let's look at the things it does.

The headline feature is the ability to stream audio over a computer network. While the MP 1260R can work over wi-fi, we strongly suggest going wired if possible for stability.

Once hooked up the T+A will cope with all the usual file formats: MP3, WMA, AAC, FLAC and WAV (with the latter two limited to 24bit/96kHz).

While there's not a great deal of material available at higher sampling rates at this point, say 24bit/192kHz, it's a shame that such a high-end product can't play back the sort of files someone spending this sort of money would want to hear.

Tonally things err towards bright and lean, but it's never enough to cause issues unless the rest of your system is already unbalanced.

The differences between various compression rates and systems is laid bare, so uncompressed or lossless (at a bare minimum) is the way to go.

We have a number of issues with the MP 1260R when used in streaming mode. A larger display would be handy when navigating tracks and folders, and the user interface feels positively primitive compared to the slickness of Apple's iPod, Touch version or not.

Listening to Internet radio shows up similar strengths and weaknesses. Sound quality is great for the source, but such is the low quality of most of the stations we tried that the T+A fails to show any significant advantage over far cheaper alternatives.

FM tuner is a surprise
Things change markedly with FM. It might be aged, analogue and allegedly due for the chop at some point this decade, but through the T+A, FM still sounds terrific. You need a decent aerial and signal strength, but given these, the tuner is impressively transparent and analytical.

It's revealing enough to show the quality chasm between stations: BBC Radio 3 is gloriously full-bodied and natural, while compressed pop stations such as London's Capital FM are thin, bright and forward.

Here too we have issues with the MP 1260R's display. The signal strength meter is tiny and so is quite hard to see.

Generally with FM, background noise is low, and there's a precision to the sound that hard to better outside the world of top-end dedicated tuners. We like the speed with which the tuner scans between stations, too.

Last, the T+A's DAC performance. Using our Acer setup, sound quality was excellent. Consistent with every other mode, the overall presentation still isn't particularly warm or overly smooth, but it's still insightful,
powerful and has a dynamic kick to die for.

However, we'd like a slightly less clinical approach to music. At times it seems the MP 1260R concentrates too hard on the details to communicate the musical message with sufficient conviction.

Some folk will like this approach, while others – and we count ourselves in this latter group – just want a touch more entertainment, more emotion and a little more involvement for this kind of outlay.

We haven't reviewed T+A products for a number of years – blame sporadic distribution – but the MP1260R lives up to the quality we've come to expect.

It's beautifully made, almost obsessively so with neat, precise edges and a level of finish that wouldn't be out of place at far higher prices. The supplied handset feels solid too, and is laid-out with care (if a little Fisher-Price in style).

The MP1260R is a fine product. Perhaps it lacks a little emotion for our tastes, but there's no denying it has an amazing range of abilities.

Products like this will be common in the next few years. If the MP 1260R is a indicator of the quality we can expect, we're happy.