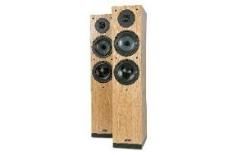 Endlessly listenable, these are accomplished beyond their price

Five stars in January 2009, same again in February 2009 and then… nothing. We’ve had the Spendor A5s out in our listening rooms often since then, of course, but this is their first formal review in over two years.

For a speaker that stands just 79cm high, the A5s are pretty heavy – it’s almost as if they’re made from concentrated essence of loudspeaker.

The looks are purposeful (22mm dome tweeter above a 150mm mid/bass driver and a 150mm bass drive unit), the wood veneer is tactile, the finish flawless. Even the speaker binding posts seem classy.

At their best when out in the room and firing more-or-less dead ahead, the A5s are a multi-talented listen. Playing Villagers’ Becoming a Jackal, the Spendors summon unlikely low-end punch, extension and control, and deliver great texture too – for all their seductive size, the A5s’ fulsome bass presence means they’re not a default choice for smaller rooms.

Ample speed and drive
Elsewhere, the midrange is alive with immediacy and detail – vocalists seldom sound more engaged – and the top of the frequency range is attacked boldly.

There’s ample speed and drive, though the Spendors are just as capable of describing barely-there nuances as the broad strokes of a recording.

In any event, their timing is sweetly precise, loading the leading edge of notes with information and offering a natural and unforced tonality. The soundstage they generate is sizeable, and their stereo focus unquestionable.

A sensitivity rating of 85 dB/W/m means they need to be shown the stick by an amplifier with adequate reserves if you’re to get properly antisocial volume out of them. Otherwise the news is all good. Good enough to see off its rivals, certainly.