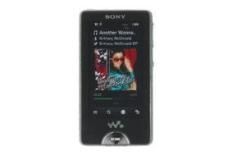 At its heart an MP3 player, an OLED screen complete with touchscreen functionality for wireless internet browsing, plus video playback, noise-cancelling earphones and an FM radio, point towards a serious challenger for the multimedia portable crown.

Sony supplies its own 'Content Transfer' software or you can just drag and drop files from either a PC or Mac.

Sonically they're a little on the bright side and lack body, but switch to a pair of reference headphones and this Sony sounds excellent.

Glass, the opening track on the new Bat For Lashes album, sounds suitably ethereal, an open delivery allowing plenty of room for a detailed delivery.

Martyn's Natural Selection shows the Sony capable of delivering dynamics and good bass depth without overall speed and agility suffering. Coupled with an impressive 33 hours of battery life, and it's a seriously enthusiastic thumbs-up for audio.

The 3in 432 x 240 resolution OLED screen delivers colourful, clean and detailed renditions of WMV and MP4 videos, but it's a shame it's not bigger. We had high hopes that the OLED screen might be so good that it would render all screens before it utterly useless, but it's not that big an advance.

Disappointing internet browsing
However, it's the internet browsing that's the real disappointment. A promising start – very fast scanning for networks, impressive range and quick connectivity – is let down by a failure to deliver accurate full page browsing like the iPod Touch.

Navigating using the touchscreen works in a similarly effective way, and there's a one-button link to YouTube, but web pages often appear as a mess – no matter how we set the screen view – and inputting text via the on-screen keyboard can be laborious.

Sonically the NWZ-X1060 is excellent – we think it will give its direct rival the iPod Touch a serious run for its money – but the size of the screen and more pertinently the internet browsing experience lets the side down.