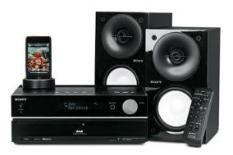 Except for the Gigajuke range of systems, this is currently Sony's most expensive micro. At £240 it's still very affordable, especially considering it's got trendy features like Bluetooth.

It's a good-looking system, but as soon as you touch it, the cheap materials reveal its budget credentials.

Of course, when you're buying a micro with speakers, an iPod dock, USB connection, DAB tuner, and the aforementioned Bluetooth at such a reasonable price, how it feels may be way down your list of priorities.

What you should care about, though, is how it sounds; and here the Sony lets itself down.

Play Bat for Lashes' Daniel and the sound produced is terribly flat. The richness and variation in the track is lost, the Sony struggling to find the detail and dynamics of the recording.

A messy cacophany of sound
The system gets confused by the bigger sections of the song, producing a messy cacophony of noise.

The speakers are largely to blame, but as is generally the case with Sony, changing them is made pointlessly difficult by the proprietary connections.

On the plus side there's decent bass weight, the treble avoids harshness, and the DAB and FM tuners are reasonably clear.

And Bluetooth? Well it's always sounded pretty ropey in the past, and here it's no different so that's not a reason to buy it, either.

If you're in the market for a micro, do yourself a favour and save an extra £90 and get the brilliant Denon D-M37DAB.