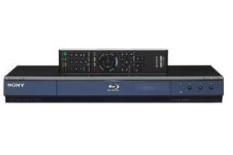 Sony's entry-level Blu-ray player is an impressively lean, mean machine. Measuring just 22cm deep, Sony has crammed all the electronics into a small chassis that has been embossed and strengthened in key areas to reduce the effects of unwanted vibrations.

The BDP-S350 also uses a new, virtually silent fan, and even the solder has been changed in an attempt to improve performance.

Out of the box, the Sony is only Profile 1.1 enabled, so you'll have to carry out a firmware update over the internet using the player's Ethernet port.

Exquisite sonic performance
This machine will output 1080p/24fps for Blu-ray and, of course, upscale DVD to 1080p too. For sound, it can output HD audio in bitstream form, or if you want to do the decoding in the player, it can convert everything to LPCM apart from DTS-HD Master Audio.

The BDP-S350 doesn't have any multichannel analogue outputs. It's audio quality where this Sony player really leads the way.

The explosions and gunfire on show in Bruce Willis's Die Hard 4.0 sound bold, solid and weighty, while dialogue is natural and full-bodied without any trace of leanness or brightness.

The BDP-S350 isn't even fazed when it comes to CD playback. Considering you're listening to a Blu-ray player, it sounds rhythmic, composed and detailed with a wide range of music.

This Sony machine also dishes out a fine Blu-ray image. Spin Kevin Spacey's 21 and the 'S350 really brings home the glitz and glamour of the Vegas nightlife and casinos.

The picture is polished, showing great attention to detail, and excellent sharpness and realism is also apparent. There's a real clarity to the image that similarly priced players can't muster.

When it comes to DVD playback, the 'S350 does the crisp transfer of Forgetting Sarah Marshall justice, displaying a welcome absence of on-screen noise.

Granted, the Sony might not tick every feature box, but if you're in the market for an entry-level Blu-ray deck, the BDP-S350 is nigh-on perfect, and if you hit the online stores you should be able to pick one up for well under £200, making this player an absolute bargain.