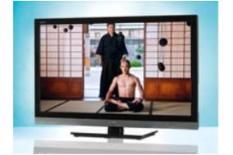 It might not be the best in its class, but the LC40LE600E confirms that Sharp is on its way back up

LED backlighting is all the rage right now, and Sharp wants a cut of the action.

The first set from the company to utilise the technology was the LC40LE700E, which we described as marking Sharp's ‘return to form' in its four-star First Test.

Now we have the LC40LE600E, which sits just beneath the '700E in Sharp's range. The differences are that this set does without 100Hz motion processing, has one fewer HDMI inputs (so three), and lacks a media-friendly USB connection.

Oh, and it's about £200 cheaper, making it perhaps the cheapest direct LED-backlit TV currently available. But is it any good?

Look beyond the styling
If you can get past the humdrum styling, uninspiring menus and nasty remote, and actually play a Blu-ray disc, the answer is yes.

The LED backlight might not provide quite the scintillation of the similarly featured Philips 40PFL9704, but it still offers deep blacks and punchy whites – as you can immediately tell from the opening credits of the Harry Potter and the Order of the Phoenix Blu-ray.

As the proper action begins, the Sharp creates a very detailed, solid picture. Individual blades of grass are nicely defined in the sun-drenched fields, and skin tones are realistic.

This scene does reveal that the Sharp's colours are a little on the warm side, though. As long as you turn the colour setting down, it's not particularly overblown, but there remains a touch of pink to whites that can make characters look rosier than they should.

Minimal motion smear
Motion smear is minimal with both Blu-ray and DVD, and standard-definition pictures benefit from impressive contrast levels just as much as HD.

Occasionally a touch of noise is evident in its reproduction of the Changeling DVD, but detail and definition is very good, if not quite best in class.

The Freeview tuner is also largely successful. A high-quality broadcast such as Top Gear looks sharp and controlled, although the set does lose a little of that grip when fed the garish Dickinson's Real Deal.

The sound produced from the Sharp's speakers is distinctly average, but overall we're rather impressed.