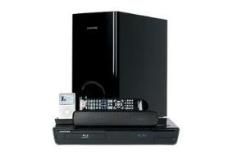 For spacious rooms and the style-conscious home cinema fan, the Samsung is well worth a look, but we wish that centre was better

This Samsung is a truly impressive-looking system. The slim, speakers are stylish, and the head-unit has touch-sensitive controls and a premium-feeling volume wheel.

Set up isn't as quick as some – there's no mic-driven calibration – but once up and running, the '1255 produces a sound that's brilliantly large-scale and room-filling.

Playing the Slumdog Millionaire Blu-ray, the Samsung is clearly bigger-sounding than its peers. There's fine depth and scale to the delivery, lending a three-dimensionality to the audio performance.

This feeling is further enhanced by the excellent dispersion of the tall satellites, which creates a seamless surround field that extends right behind the listening position.

Spacious delivery
Switch to a music Blu-ray and the size of the delivery enhances the spaciousness of an open-air venue.

This is also the point at which you start to appreciate the taut, punchy subwoofer. It's tonally accomplished and brilliantly integrated with the satellites.

The Blu-ray picture is also very accomplished. Insight into blacks isn't quite the best, but the overall image is sharp, detailed and balanced, and the same can be said of upscaled DVD.

But the Samsung has its flaws, too. That small centre speaker sounds thinner and weaker than the floorstanders, leaving voices without fullness or definition.

Weak centre channel
It also means sound effects that fill the whole surround field have a weak spot right in front of the listening position.

Switch to stereo music and the centre isn't involved, so the tallboy speakers and musical sub are free to create a solid, taut and punchy soundstage.

Of course, this is a surround system, so we can't let the centre's shortcomings slide, but more significant to the Samsung's final score is its price: at £600 it doesn't quite make it to the top.