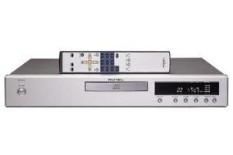 A well-executed design with many plus-points, but rivals deliver a more spacious and better-focused sound

For every thrilling, universally lauded Godfather II, there's a turgid, justifiably vilified Grease II. Yep, there's no guarantee that a favoured forebear means relatives or siblings will be as warmly welcomed.

This sort of slightly contrived logic applies equally well to hi-fi: no manufacturer can hit the bullseye every time, after all.

Slim, smart and solid – just like its relatives – the RCD-06 is a discreet and inoffensive looker, though cramming the entire interface to one side of the disc tray results in a slightly lopsided appearance. The remote control sounds the only low-rent note: it's a thin and flexible device that's much too large for the number of buttons it hosts. Generally, though, the Rotel's spec is well up to par.

Brian Eno's Here Come the Warm Jets is a stern test of sonic good practice, and the RCD-06 pretty much reveals its entire character when transcribing this one piece. Low frequencies are substantial and agreeably solid, though not the most disciplined where timing is concerned, and the midrange is distinct and clean, although not as expressive as some rivals.

Unlike the RCD-02 that this player replaces, treble frequencies here are briskly crisp, but don't overplay their hand. Tempo and attack are decent, too.

Things can sound cramped
The RCD-06 proves less-than-enthralling where focus and soundstaging are concerned. Some rivals offer a better integration and imaging, while many performers sound cramped on a rather inhibited stage. 'Agoraphobic' is how one reviewer described the Rotel's sound, which is another way of saying it is more Blues Brothers 2000 than The Empire Strikes Back. Definitely worth a listen, though.