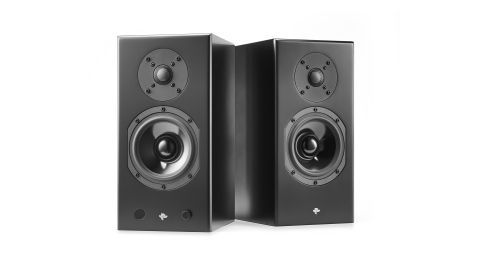 They could be a little more exciting, but there is a lot to love about Totem’s KIN Play wireless speaker system

Rarely does a product name so aptly represent what it means to own a sound system, but Totem has pretty much hit the nail on the head with this one. ‘Kin play’ is a phrase uttered in frustration so frequently here at What Hi-Fi? that we’re wondering whether the Canadian company has bugged our test rooms.

Much of our ire in recent years has been directed towards wireless speakers, such as these Totem Acoustic KIN Plays, where the very technology designed to make our lives simpler has left us gripping clumps of our own hair.

But if it’s ironic to name these speakers as such, it’s probably unfair to dub them merely wireless. Comprising one active unit, which keeps its passive partner on a lead, there’s much more besides Bluetooth connectivity that makes the KIN Plays sing.

As well as encasing a 120W-per-channel amplifier, that master cabinet has an RCA input and one for 3.5mm aux, an optical digital connection and even a phono stage and grounding terminal for a turntable, as well as a subwoofer output.

In effect this is a basic hi-fi system, to which multiple other sources can be added to create a more traditional set-up. It lays the ideal foundation for a plug-in-and-play unit that can be built upon over time, and we anticipate plenty of people using it in this way.

And why not make this the heart of an entire home entertainment hub? Even with a multitude of decent soundbars available around this price, you’ll still struggle to find the kind of spacious, authoritative presentation you get from a pair of stereo speakers; the Totem KIN Plays make it simple to send sound from your TV and really up your AV performance.

They’re a decent size, something that helps their full-bodied performance, but the somewhat unassuming design – especially if you opt for the Satin Black rather than Satin White finish – means they won’t take your eye away from the action.

But for the small Totem logo, all that's on show here is the KIN Plays’ 25mm metal alloy dome tweeter and 13cm natural hybrid woofer – and on the active speaker, a small volume dial and coloured light to signify power and connection.

Spending nearly four figures on a product doesn’t always guarantee a substantial remote, but Totem’s does at least cover all you’ll need to control the KIN Play. That means playback, volume and source selection, as well as bass and treble tweaking and a button to return the tone controls to factory setting.

Totem recommends 50 to 100 hours playing in before the KIN Plays will begin sounding their best. That’s nothing unusual, of course, but our particular unit has a piercing hardness to the treble that takes longer to calm down than many other speakers we’ve tested. That’s not a criticism, more a warning not to judge these speakers straight from the box.

Because, eventually, they really do sound quite good. There is still a slight grittiness to the treble, but it is by no means harsh. We tamper with the bass and treble controls a little, but if you can place these speakers a decent way into the room and on dedicated speaker stands, the balance is pleasingly even.

There’s a good amount of weight to the bass, without it taking over the mix, and we don’t feel as if the top end is overly capped. The midrange could do with a little more presence, but it couldn’t be described as particularly recessed. Despite a marginal softness to the overall presentation, detail is plentiful enough for us to be satisfied with the financial outlay.

What we want from a product such as this, especially when it comes to Bluetooth, is a fuss-free and cohesive presentation, and that is what the KIN Play provides. Our music hangs together well, with enough space for instruments to breathe, despite not being the most airy of soundstages. Totem seems happy enough organising the densest orchestral arrangements just as it would relay a more straightforward duet.

It’s a pleasant performance overall, but we’d just require a little greater vivacity for the full five stars – a sense of excitement and anticipation that truly draws us into the music. It’s partly due to timing being less than regimental, partly to do with missing some of the intricacies of dynamic expression, and partly to do with a slight lack of punch.

The KIN Plays are not fundamentally lacking in those regards – this is still an enjoyable and generally entertaining performance – but we find ourselves wishing Totem had played things a little less safe and really let itself go.

Put them side-by-side with the KEF LSX – a similar speaker-cum-system package at the same price – and it becomes clearer those sonic elements in the KIN Plays are somewhat lacking.

But the trade off is a bigger sound, coming from bigger speakers, not to mention a differing feature list. The KEFs don’t have a phono input, for example, which is likely to be a hit with many customers looking to revive their vinyl collection.

All in all, if you want a competent two-box hi-fi solution that won’t do disservice to any partnering electronics you look to add over time, Totem’s KIN Play should be on your shortlist. We can promise you won’t be uttering their name in frustration.