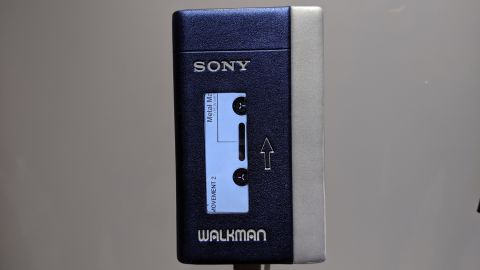 The Sony Walkman NW-A100 series arrived at IFA 2019 with great retro fanfare. It’s the latest in the 40-year history of Sony’s portable players and is aiming to convince a new generation of music lovers to forget about their smartphones and take portable listening to a whole new level.

In Europe, there's a choice between the Sony Walkman NW105 and the limited edition 40th anniversary model, the Sony Walkman NW-A100TPS (above). The two are almost identical, but the TPS comes with a soft cover, styled like the very first Walkman, and a presentation pack.

The NW-A105 and the more premium Sony Walkman NW-ZX705 get their share of old school fun, though. Along with the TPS, they feature a rather nice moving cassette tape splash screen which changes depending on what you're listening to.

As for how they sound and what they’re like to use, we made a bee-line to the Sony stand at IFA 2019 to find out.

The NW-A100 series is similar to the premium NW-ZX507 model. It’s a palm-sized rigid aluminium frame that holds a 3.6in Full HD touchscreen, and it uses many of the same high quality audio components as the ZX line. That includes the fine sound resistor chosen for its delicate handling of audio detail.

It measures around 10cm x 5cm, weighs 108g and offers somewhere between nine and 26 hours of battery life, depending upon whether you also use noise cancelling or ambient sound modes.

On the right hand side of the device are extra large volume controls and slightly smaller track controls, while on the bottom you'll find the USB-C charge port and microSD slot. The NW-A100 comes in a tasteful choice of black, blue, ash green, red and orange, and has 16GB of internal storage. It will set you back £320 (€350) when it launches in November.

The Android 9.0 OS makes the device perfectly usable and gives access to all of your favourite music streaming apps, but the big sell is the Walkman app itself.

Inside this PMP, Sony’s S-Master HX digital amp reduces noise and distortion as it delivers the hi-res audio, while the DSEE HX processor upscales any lower quality music whether locally stored or streamed. It does this by recognising instruments, voices and genres and calculating what has been lost during digital compression.

The NW-A100 supports hi-res music through DSD and PCM files up to 32-bit/384kHz. Depending upon the codec you’re listening to – those supported include MP3, WMA, FLAC, AAC, ALAC and MQA – you get a different moving image of the retro cassette tape and, while the splash screen serves no particular purpose, there’s some significant novelty factor.

We played an MQA stream of Liberian Girl by Michael Jackson from Tidal, and put on the £259 Sony h.ear WH-H910N headphones attached to the Walkman on the show floor.

Right off the bat, there’s some really nice detail in the synth sounds of the track's intro. The xylophone, the drums and the tropical themed samples tie together nicely.

Dynamics aren’t the easiest thing to listen for on a busy trade show floor but, based on our first impression, we'd be amazed if this Walkman isn't better on this front than any smartphone you can currently buy. The song is also punchy and there appears to be excellent tonal agility.

There are noise cancelling and ambient sound options on the menu, although it’s not clear at present if they will be available outside Asia. It may be that these features are only compatible with certain headphones that are not available in the UK.

Virtual cassette gimmicks to one side, the Sony Walkman NW-A100 series comes in at an interesting price. That kind of money is a lot less than many people spend on their smartphones, and could encourage a few to cough up for a PMP instead.

With the continuing rise of paid music subscriptions, there also appears to be something of an appetite for the higher level portable listening this device clearly delivers. Just how much better than a smartphone this Walkman is, though, remains to be seen.

There’s only so much we can tell before we’ve spent more time with it but, on the surface at least, Sony seems to have produced something that feels worthy of the Walkman name. It's not exactly cheap but it may be affordable enough to turn a few casual listeners into aural fine diners.