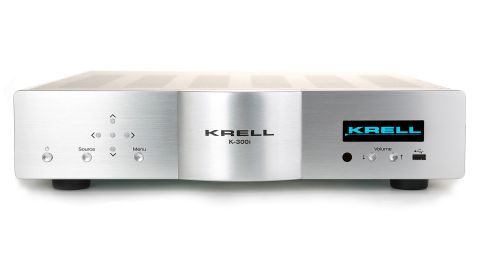 Krell is one of the founder members of the market sector we now know as the high-end. Back in the 80s, alongside Mark Levinson and a handful of others, it raised performance standards (along with price tags) to deliver some of the finest hi-fi ever made.

The brand’s products have remained highly respected over the years, though the business side of things has fluctuated, particularly in recent times. But a change of ownership and a renewed focus on core values has seen the product range rejuvenated.

The new K-300i integrated is part of this regeneration and is intended to bring Krell bang up-to-date in terms of connectivity without sacrificing the performance levels with which the company has become synonymous.

This amplifier lives up to our expectations in the metal. It’s an imposing looking unit with a clean but brutal appearance that couldn’t be anything other than a product made by Krell.

We have a complaint here though. That simple control layout isn’t particularly intuitive in use, with input changes needing multiple button presses and changing configuration proving a bit of a faff.

Thankfully, the supplied metal remote makes these actions quicker and less tortuous. That remote is nice to hold, though we never quite get used to the rattling as the metal buttons move around in the metal case when the handset is moved.

A basic version of the amplifier is available for £7,500. This is a straightforward 150W per channel analogue integrated with good quota of single-ended and balanced line-level connections. That’s a traditional approach to amplification and is likely to slot into many premium systems without issue.

Spend another £1,300 to get the optional digital module, which is the version we have on test here, and the K-300i becomes a just-add-speakers system. This option has the ability to stream music over a home network and aptX Bluetooth, as well as supporting streaming platforms such as Spotify Connect, Tidal, Deezer, Qobuz and vTuner.

Then there are the digital inputs. Add the digital module and you get USB, optical and coax connections. The USB will accept up to 24-bit/192kHz PCM files and DSD128 music streams. The coax matches the USB’s PCM rating but, as is usual, isn’t compatible with DSD files. Neither is the optical, but it will handle 24-bit/96kHz music. The K-300i is also MQA compatible and Roon-ready. We can’t think of an alternative that’s as well equipped.

It’s interesting that Krell has also included HDMI connectivity in the form of two inputs and an out. The company recognises that an increasing number of people use their stereo system to improve their television’s sound.

Connecting the amp to a TV’s ARC-equipped HDMI socket means that it can strip the audio track from anything the TV is showing. Including such an input shows surprising pragmatism from such a purist high-end manufacturer and proves its willingness to accommodate the wide range of sources people use today, regardless of the audio quality.

Krell doesn’t have a dedicated streaming control app for the K-300i but recommends the use of mConnect (iOS and Android). It’s free and works well enough but doesn’t feel as slick as dedicated software from the likes of Naim or Linn.

The K-300i feels superbly made. It’s solid and gives off an aura of permanence that’s hugely appealing. Fit and finish is impressive too, just as it should be for the price. There are two colour options, black and silver. This is a heavy amp, weighing at almost 24kg, so be careful when you lift it.

Take the Krell’s lid off and it’s the huge 770VA mains transformer and 80,000uF of smoothing capacitance that grabs our attention. That’s the kind of power supply arrangement that makes the claims of the power output figure doubling to 300W per channel into a 4 ohm load all the more believable.

We’re also impressed by the neatly designed circuit boards that are fully differential from input stage to output in a bid to improve performance, and a little surprised at how compact the heatsink is considering just how much grunt this integrated has.

A relatively small heatsink can be used thanks to the use of Krell’s iBias technology. This keeps the output stage working in Class A but monitors the input signal closely to reduce any power wastage where possible.

That doesn’t stop the casework from getting hot though. This amp still needs plenty of ventilation around it to help with heat management. Apart from that, and the relatively large footprint of 44 x 46cm, there’s no issue as far as installation is concerned.

We already know that the K-300i is happy to accommodate pretty much any source you can think of. But if you have a record player, you’ll need an outboard phono stage. While some would prefer such a module to be built-in, the hostile electrical environment inside the amp makes it very difficult to optimise the sound of those very low level analogue signals. Something like Musical Fidelity’s MX-VYNL (£699) is a decent starter option, though going higher in price to the likes of Cyrus’s Phono Signature (£1,495) would be even better.

This is a highly transparent performer though, so while it’ll work happily with most things across its various inputs it won’t ignore their sonic quality. This is brought home when we play some tunes from our Apple iPhone X via Bluetooth. The connection is quick and fuss free, but the results across a range of music from Kate Bush to Olafur Arnalds is listenable at best.

That’s not the Krell’s fault, though. It’s a highly resolving product that’s simply showing the input signal for what it is. With Bluetooth, dynamics are limited, as is transparency and resolution. That said, the sound is still entertaining and it does open up your system to playing music that you might never hear in another way.

Things take a notable step-up when we hook it up to our test network and stream music from our Naim server. Here we play all sorts of recordings, from a CD spec 16-bit/44.1kHz file of Undun by The Roots, right the way through to Hans Zimmer’s The Dark Knight Rises OST (24-bit/192kHz) and Stevie Wonder’s Innervisions on DSD. The K-300i switches between file types seamlessly and quickly, something that isn’t always a given.

With Undun we can easily follow the group’s vocals and revel in the thumping beats and smooth flowing rhythms. This amplifier resolves an impressive amount of information and organises it with class leading stability and control. Rarely do we come across an integrated amplifier that sounds so composed, regardless of the complexity of the recording.

This aspect is highlighted with the Dark Knight Rises OST. Here the Krell’s bright-lit and strongly etched presentation works a treat. It sounds wonderfully agile and punchy, carrying a big bat while still able to speak softly when the music demands.

We’re pretty shocked by how well the K-300i delivers the soundtrack’s huge dynamic swings and the way it grips our reference ATC SCM50’s woofers to produces what is arguably the tautest bass we’ve heard from any amplifier at this level.

Such is the amplifier’s combination of control and muscle that it sounds right at home delivering massive volume levels through every speaker we tried, from the ATCs to Revel’s Performa M126Bes.

You can add a wide, stable and wonderfully precise soundstage to the list of positives. It’s easy to pinpoint the position of instruments in the orchestra and their placement remains focused, even at higher volumes. That’s quite some achievement.

Switching to Stevie Wonder’s Higher Ground shows that the Krell has dancing shoes too. While it doesn’t prioritise rhythmic drive in the way of PMC’s Cor, the K-300i still manages to convey the drive and momentum changes in the song well. It’s a fun listen as well as an informative one.

The results are equally positive with the other digital inputs, proving that the optional digital module is a good one and great value at £1,300.

Does it negate the need for other sources? The digital module is certainly comparable in sound quality to the better standalone streamers we’ve heard below the two grand mark, but when we switch to our reference sources – Naim’s range-topping ND555/555PS and SME’s Synergy turntable package (with its integrated phono stage) – it’s perfectly clear that the analogue sections of the amp are capable of doing even better.

With these sources, the Krell’s detail resolution is even better than we expected, though the convincingly even tonal balance and spacious, uncluttered character remain unchanged. We’re now more aware of instrumental textures and notice more of the dynamic nuances in a recording. At its best, the K-300i is good enough to make you think there's no reason to spend more on amplification.

Of course, compare this integrated with far pricier reference equipment – in our case, Burmester’s 088/911 pre/power – and you’ll hear greater subtlety, an extra dose of transparency and even greater rhythmic precision, but remember, to get that you’ll have to spend many thousands more.

Krell released its first integrated amp, the KAV-300i, back in the mid-90s. That was a terrific performer, and this current version reminds us of that.

The current integrated may be the cheapest amplifier the company currently makes but it still delivers a concentrated dose of the fabled Krell sound. Add the forward-looking feature set and you have something of a high-end bargain.

We doubt there are many times those words have been used to describe a product worth almost nine grand.