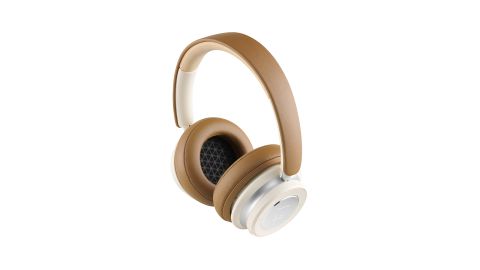 This is a beautiful pair of elegant, long-lasting and capable headphones, but the performance errs on the side of caution

Better known for its Award-winning Oberon and Spektor speakers – and, more recently, the five-star Katch One soundbar – Dali is something of a late bloomer when it comes to producing headphones.

In fact, the two-strong IO range represents the Danish brand’s first foray into the wireless over-ear headphone market. We previously reviewed the IO-6s and though we were impressed with form, finesse, detail and functionality, we noted that the sound performance lacked a little dynamic punch.

The second model in the range, the IO-4, is £80 cheaper but foregoes the active noise-cancelling function of the IO-6. So how will the IO-4 perform compared to its pricier sibling?

The Dali IO-4s feel every bit as premium as you’d expect from a pair of quite expensive headphones. Weight, dimensions and finish are pretty much the same as we remember from testing the IO-6s. The IO-4s actually weigh in at 5g lighter, but we can't tell the difference when holding the two sets aloft.

In fact, placing the models side by side, the only perceptible difference between them is the small circular button next to the USB-C port on the right earcup of the IO-6s.

This button toggles noise-cancelling options which, of course, the IO-4 model does not support. But because the earcups offer a good amount of isolation in their design alone, we actually barely miss the noise-cancelling function when we’re out and about.

The earpads are also soft and capable of rotating a full 90 degrees, making them comfortable around the neck as well as on the head. The earcups can also lie flat for easier storage, although it’s a shame you don’t get the same canvas zip-up travel case with the IO-4s as you do with the IO-6s.

The simple drawstring bag included here does a job, but is hardly protective and a significant step down from the IO-6’s proper carry-case.

Battery life Up to 60 hours

There’s no dedicated app for tweaking this and that, but we don’t feel the need for it. Dali is famous for its speakers, and it's the custom 50mm paper fibre cone driver and over-ear enclosure (braced and stiff like a speaker cabinet with rubber dampeners inside to eliminate vibrations) that are the real stars here.

That said, another headline-grabber is the battery life. The IO-4s claim a whopping 60 hours of wireless listening time, double that of their noise-cancelling siblings. In the unlikely event you run out of juice, you can keep listening in ‘off’ or passive, wired mode, using the supplied mini-jack cable. Charging time, thanks to the USB-C port, is just 2.5 hours from flat to fully charged.

In terms of wireless codecs, Bluetooth aptX, aptX HD and Apple AAC are all supported.

The controls on the right earcup work a treat. For volume adjustment, lightly press the upper or lower part of the outer disc, and for track control, call-handling or connecting to your voice assistant, it’s the central, branded button.

This is new tech, but it feels underpinned by old-school principles and methods. During our listening, the Bluetooth connection is rock solid and voice calls are clear. Each time you toggle the power slider to fire the headphones up, a calming voice announces battery percentage and pairing status; a lovely touch.

We start listening to Daniel Avery and Alessandro Cortini’s Illusion Of Time on Tidal. Wind darts from one ear to the other and, as the chord progressions build, there’s an expansiveness on offer here; a cohesive yet spacious layering of sounds few sets of headphones at this level can match.

Stereo L comes through with noteworthy transparency throughout the frequencies; from the synth and low-level rhythmic riffs up into the keys and chimes through the treble. The Dalis handle the layered, sometimes dissonant, sometimes resolved sonic strands that typify Avery’s work with ease and class.

We switch to Lil Nas X’s Panini, and the breathy whistling at the start of the track is remarkably detailed and easily recognisable. Nas X’s vocal is emotive and textured, perfectly central in the intentionally pared-back accompaniment as the IO-4s deftly relay this sombre track. Throughout British Sea Power’s North Hanging Rock, the birdsong we’ve struggled to detect through lesser headphones comes through loud and clear, such is the extra detail on offer.

We cue up Dave’s Psychodrama album and a small but significant gripe we had when testing the IO-6s reveals itself again in the IO-4s. We love the separation, transparency, clarity and detail present in vocals and other instruments across the frequencies, but the issue concerns the rhythmic drive and momentum; the punch that makes Dave’s songs exciting.

The IO-4s handle our source material with refinement and elegance, and while this can lend itself to a spacious performance with some genres of music, if a pair of headphones is altering any musical recording, by softening the dynamic impact, the words ‘refined’ and ‘elegant’ aren’t always the most desirable adjectives. This is particularly true for an edgier or funkier track.

In trying to deliver a cohesive, integrated hi-fi sound, the Dalis make elements such as a grimy bass riff, intentional pops in recordings higher up the frequencies or a head-rocking guitar lick feel marginally more distant and less exuberant.

Dave’s keys sound less excitable as he raps – and that’s an issue. We listen through the Award-winning Sony WH-1000XM3s and the extra zeal – the toe-tapping rhythmic drive that fuels Dave’s ode to his hometown Streatham – is present.

There is no doubt that Dali has crafted a fine set of headphones in the IO-4s, boasting impressive stamina and comfort. By offering a model without noise-cancelling, Dali has also managed to come in at well under £300 ($400). If you're looking for a pair of headphones that offers a more refined effortless, spacious sound and handles midrange detail and vocals particularly well, you have found it.

But the performance errs on the side of caution. Dynamically, the IO-4s are less expressive than we’d like.