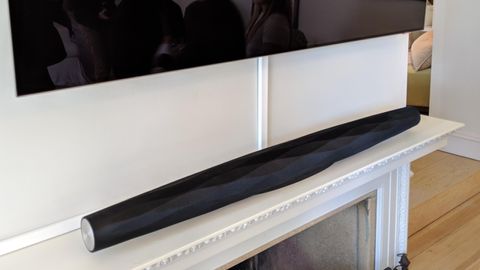 B&W's newly-launched Formation wireless multi-room system has something for everyone, including home cinema fans. The Formation Bar is, you guessed it, a soundbar, and the Formation Bass is a beautifully compact subwoofer.

They're two separate products and there's no need to use both together, but after our behind closed doors first look at the Formation family, we've grouped them together here for convenience.

On first impression, we're fans of how the whole Formation family looks, and the Bar and Bass are no different. The black and silver styling looks sleek, and reminiscent of B&W wireless products past, and everything feels solid and well put together - as you'd expect for the price (the Formation Bar is $1199, the Formation Bass is $999).

It's not just the price tags that might instantly limit their appeal, however - this B&W soundbar has a formidable footprint. It measures 124cm wide. That's six centimetres wider than the Sony HT-ST5000, which we described as "hefty". Naturally, these are aimed at people with big TVs and plenty of room. It can be wall-mounted, and you'll need to make space for a bar that's just over 10cm deep by 10cm high.

Conversely, the Bass is more compact by subwoofer standards but seems just right for partnering with a slim soundbar rather than a 5.1-speaker surround sound system. The opposed driver design instantly reminds us of the legendary, multi-Award-winning B&W PV1, quite simply one of the best subwoofers we've ever tested. So that's a good thing. At 25 x 28 x 26cm (HWD), it's a cylinder of bottom-end muscle.

The entire B&W Formation suite of products has a thorough list of shared specs. So they all use B&W's own "perfected" mesh network. This is to ensure instant synchronisation across all your devices and rooms, while also forming a solid network connection that doesn't interfere with your home wi-fi.

The Formation Bar, like the rest of the range, is compatible with aptX HD Bluetooth, Apple AirPlay 2 and Spotify Connect, and is Roon Ready. You'll also be able to use the Formation app. You wouldn't stream your music directly to a solitary subwoofer, naturally, so it instead just has the necessary network connectivity to be used in partnership with the Bar should you want to add some extra grunt to your TV's sound system.

The Formation Bass has a digital amplifier, DSP and Dynamic EQ, with 250-watts of power output feeding two 6.5in bass drivers. Small, yes, but at 12.5kg, we think this will be a bit of a beast.

Inside the Bar's angular design are nine speakers. There are 3 x 1in double dome tweeters and 6 x 2.6in woven glass fibre mid/bass drivers, the same as those found on the B&W 600 series. Six 40-watt digital amplifiers provide the power and the soundbar also has DSP and Dynamic EQ.

Connectivity comes in the form of a digital audio optical connection, so there's no HDMI connection. There's also no support for next-gen audio formats such as Dolby Atmos or DTS:X (or even DTS), with Dolby Digital the only codec on the spec sheet.

Looking at the rest of the market, the Bluesound Pulse Soundbar 2i (£799/$799) does make room for optical and HDMI. While Sonos, who long-argued that HDMI wasn't crucial on its soundbars, has now released the Beam with an HDMI connection. The Beam (£399/$399) also packs the Amazon Alexa voice assistant (with Siri and Google Assistant set to follow), which isn't here on the Formation Bar.

We were treated to a brief demo of a number of movie and music clips to hear the B&W Formation Bar on its own and also with the B&W Formation Bass. And while it's always hard to draw too many conclusions, we were impressed. The same team as working on B&W's 800 Series are said to have worked on these products, so it's clear B&W has come at the products from a pure audio performance perspective.

And in fact, with one of the movie clips we heard not seeming to be of the highest quality and sounding a little flat, it was when playing music that the Bar really came to the fore, delivering a clear, detailed, musical sound. Adding the Bass brought some serious weight; tight, focused bass notes, adding scale and breadth to the overall sound. Switching back to a suitably over-the-top Mission Impossible chase scene, the system sounded precise and dynamic.

A complete whole-home wireless system from a company such as Bowers & Wilkins should be exciting for anyone who values audio performance every bit as highly as convenience. The addition of a soundbar and subwoofer (especially one reminiscent of the famous PV1) is music to our home cinema-loving ears.

Neither the Formation Bar nor the Formation Bass are cheap, and the Bar comes in comfortably above the equivalent Bluesound and Sonos offerings. There are similarly-priced soundbars from Samsung and Sony, though these major on Dolby Atmos functionality, something missing here.

B&W wants its Formation products to major on performance to make the competition irrelevant for anyone prepared to pay for the best. We can't wait to give these devices the full review treatment to find out if it has succeeded.