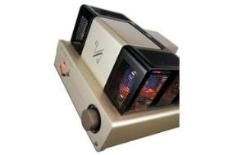 Quad's new integrated amplifier is a strange thing. Its appearance apes the Quad products of the past, but, in sonic attitude, it sounds as modern as valve amplifiers get.

Let us explain. Most valve amps we review broadly live up (or down) to their stereotype. That's to say they sound warm and fluid, with a lovely midrange and soft bass. But if it's explosive dynamics you crave, look elsewhere.

Listen to gentler forms of classical, acoustic or folk music and we're sure you'll be very happy with most of the decent samples of the breed.

However, try and play everything from Dr Dre to Dvorak, and most valve amplification simply doesn't deliver. This Quad II Classic integrated is one of the few that will.

The tonal balance is very neutral – something Quad has traditionally valued – so instruments and voices convince in tone and texture.

All very good, but it's this integrated's speed, resolution and dynamics that impress us most. This is one valve amplifier that can quite happily play the likes of Florence and the Machine's Lungs without dissolving into a soggy mess.

This album has a rough, raw production that the Classic does little to hide. What it doesn't do is make a meal of the harshness on this disc; instead, it lets the innate musical quality come through.

There's plenty of drive and energy – both qualities similar designs fail to deliver. Few valve integrated amps have punch, but this one does.

Enough power to fill most rooms
The power output is rated at 25 Watts per channel, which isn't a lot. It is, however, enough to drive most speakers to a reasonable level in all but the largest of rooms.

Just don't expect this Quad integrated to shake the foundations of your house or rattle the furniture. The Classic also doesn't produce a sound of immense scale compared to similarly priced transistor alternatives. It lacks a degree of muscularity and punch, too.

The Quad II has a built-in phono stage, which is something of a rarity at this price level.

The phono input is compatible with both moving magnet and moving coil designs and produces decent results. Noise levels are low and much of the line stage's outgoing character is retained.

However, if vinyl is your main source, we'd still use a good dedicated outboard unit. Leema's Elements is noticeably more transparent and costs just £500 – not a massive sum in the context of the kind of
system this Quad is likely to be used in.

Build and finish are fine, although there isn't much ofa luxury aura about this Quad. It's tidy, but we know of amps at half the money that look and feel classier.

As far as system matching goes, the Quad isn't particularly fussy about speakers, bearing in mind its relatively low power output. We got reasonably good results with Spendor's SP2/3R all the way up to our reference ATC SCM 50s.

Perhaps most surprising was the combination with the £470 EB Acoustics EB1s. There may be a massive price difference between the two products, but this pairing delivered some of the most musical sounds we've heard in a long time.

In many ways it's the least valve-sounding valve amplifier we've heard. That said, £4500 is an awful lot of money, and at this price level it's fair to expect an utterly brilliant performance from an amp.

Good as the Quad is, it doesn't quite manage that well enough to get the full five stars. But it deserves to be seen and heard.