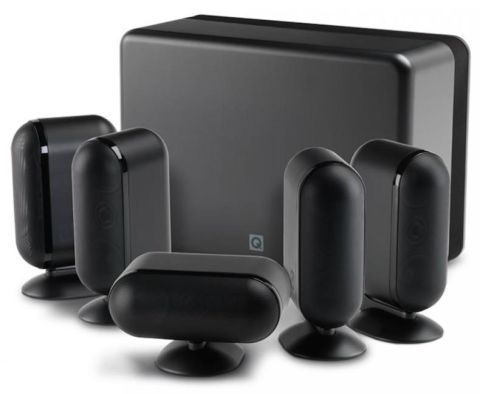 While the Q Acoustics Q7000i could officially be considered an update to the 2011 Award-winning Q7000 package, to think of it as just that would really be selling it short.

The Q Acoustics team has tweaked the design too, with the high gloss of the Q7000 swapped for a more understated matt finish, in a choice of black or white.

The look of the system is more or less the same, though. It comprises five pill-shaped satellites, each housing two 7.5cm long-throw mid/bass drivers that straddle a 25mm ring-radiator tweeter. The speaker terminals sit in the satellite’s base, which doubles as a wall-mount.

The subwoofer is a rather chunky rectangular box that houses a 20cm driver. The terminals are tucked away in a side panel, where you’ll also find crossover and volume controls, all of which can be covered up again once you’ve got it set up to keep things neat.

The Q7000i is a stunning package at this price. Mission: Impossible – Ghost Protocol, a good test disc for picture and sound (and a decent action romp to boot), shows this system at its best.

Gun-fights whizz around the room with an impressive sense of scale and accuracy, and shrapnel bounces convincingly off the surroundings during the inevitable explosions.

You get a reassuring thud from the bass, too. It’s packed with texture and never struggles to keep up with the fleet-footed satellite speakers, managing to stay organised and agile without ever sacrificing any bass punch.

There’s a really enjoyable tonal character to the Q7000i’s presentation – dialogue is clear and full of detail, and there’s a great sense of openness that means you wouldn’t think you were listening to a relatively small speaker system.

It can go loud too, and still keep its composure. But equally, bring it down to a lower volume and you won’t lose any of that dynamic sparkle that makes it such an expressive system.

Switch from action blockbuster to some music and the good news continues – it’s a warm, lively presentation, with stacks of detail on show. John Legend: Live at the House of Blues is brimming with energy.

You can really feel the gusto with which he plays every key on the piano and the passion that he throws into his vocals. There’s lots of information in a live performance, but the Q7000i tells you every last bit.

We are rather taken with the Q Acoustics Q7000i speaker system. And it’s in the same way that we were smitten when we first heard the original Q7000.

You might get a touch more articulation and low-level dynamics from more expensive packages, but at the sub-£1000 mark you’ll be hard pushed to top it.