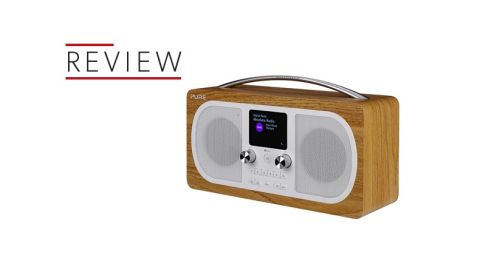 Good design, enjoyable sound quality and practical to a tee – this radio will be comfortable in most homes

For many, the radio is still the most important piece of audio equipment in their home. It’s the way that they discover new music, keep up with current affairs, or even just have something on in the background when they’re cooking or chatting.

And Pure has been a dominant power in bringing radio to the people – its products have received their fair share of four- and five-star reviews over the past decade-and-a-half. So how well does Pure’s latest radio, the Evoke H6, manage?

Without putting too fine a point on it, the latest radio in Pure’s line-up looks exactly how you’d expect a modern radio to look.

There are a couple of dials on its face, one to select your music source and one for volume. Both are responsive and feel good to use, with a handy mute function activated by pushing in the left knob.

The build quality could be a little nicer – the plastic face of our example doesn’t quite line up with the wooden enclosure – but it still looks and feels the part. Some people will prefer the more natural aesthetic to the black-box design of certain other radios.

In the middle of the radio is a colour screen that displays radio station logo and programme information. Underneath the screen are buttons to control radio presets – you can store a maximum of 40 (up to 20 digital and 20 FM stations).

Alongside DAB and FM stations, the Evoke H6 has a 3.5mm input on its back for external analogue sources, Bluetooth connectivity for wireless playing and a headphone jack.

You can also tweak the way your music sounds by adjusting the EQ settings - options include ‘Classical’, ‘Jazz’ and ‘Pop’.

If you mainly listen to one type of music, or like your music to have extra bass or more treble, it’s worth trying the settings out. We’d recommend just keeping the EQ to ‘Natural’.

As with many radios, the Evoke H6 has an alarm function that allows you to set two alarms - a nice addition is the snooze-button-cum-handle you can tap to stop your alarm, letting you have another five minutes of blissful sleep.

For added portability, and a claimed 18 hours of battery life, there is the option to pick up a ‘ChargePAK’ rechargeable battery for £35 if you want to take the Evoke H6 out and about with you.

Tuning in to a DAB broadcast from BBC 6 Music, it’s clear the Evoke H6 has no trouble going loud or providing the solid sound you’ll need for casual listening. It easily fills up our medium-sized testing room, and the dialogue between presenter and guests is relatively warm and good to listen to.

No matter whether we’re listening to DAB, FM, Bluetooth or via a 3.5mm cable, this radio has the same sonic characteristics across the board. It takes the breathy singing from Alvvays’ Archie, Marry Me in its stride.

When her vocals lift up to the ethereal, high-pitched notes in the chorus of Dreams Tonite, the Evoke H6 conveys them without any harsh edges – and that remains so even when we push the radio towards its top volume.

There’s a decent amount of detail in the vocals too. We play My Chemical Romance’s The Black Parade and get a good sense of the fragility in Gerard Way’s lyrics, and the natural harshness in his voice as he builds up to the chorus.

Timing is good too. When Calum Scott and Tiësto’s Dancing On My Own remix comes through via Heart FM, the Evoke H6 keeps up with the bass drums and faint clicks, giving an element of solidity and power to the track. You won’t be waiting long before your feet start tapping and you’re nodding along with the beat.

We connect the Evoke H6 up to a MacBook Pro and start a blast through Stevie Wonder’s Superstition. Each instrument is kept well organised and individual, which is quite impressive for a recording with so many overlapping sounds.

Between the clavinet, synthesisers, trumpets, saxophones, guitars and drums – as well as Wonder’s singing – there’s a lot to handle, but the Evoke H6 doesn’t lose track of the layered melodies.

However, there are some places where this radio could improve. The midrange is insightful enough for a product like this, but also a little congested. There’s a boxy quality to the presentation that stops it from achieving the dynamism that we’ve heard from other radios.

And while its bass has reasonable weight and power, it also lacks the agility to properly render the smaller details. Playing sections of Hans Zimmer’s Inception soundtrack, the subtle harmonics in the horns and strings of Dream Within a Dream – nuanced reverberations and the layers of sound in the chunky notes that are so typical of Zimmer’s sound – aren’t conveyed with the same sophistication as the similarly-priced Roberts Stream 93i.

But there’s something to be said for simplicity, and it’s clear that’s what the Evoke H6 is shooting for.

It’s not the type to blow you away with a long list of features or an out-there design. It’s a respectable, satisfying radio that is unlikely to be out of place in most homes.