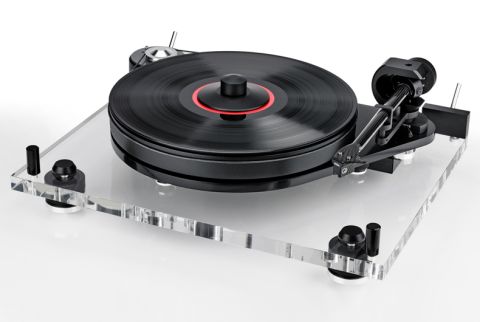 This rather gorgeous and eloquent turntable is a worthwhile listen

Pro-Ject’s recent record has been a smattering of rather good four-star turntables, although the original Pro-Ject 6 Perspex turntable received a five-star review from us in 2008. Can the 2016 version follow suit?

The new Pro-Ject 6 Perspex SB is a manual, belt-driven turntable that incorporates its own electronic speed box (the SB in its name), but opts not to have a built-in phono stage.

Our review sample is pre-fitted with the Ortofon Quintet Black moving coil cartridge – usually £650, but as a bundled deal with the 6 Perspex SB (which is £1300 on its own) comes to a total of £1700.

Every element is impeccably finished and the turntable is built to the highest standards, ensuring a rigid, well-damped machine. The motor runs quietly and the arm and main bearings are nicely engineered, with low amounts of free play.

The suspension system is cleverly designed using magnets: three pairs of opposing magnets prop up the sub-chassis, with plenty of scope to adjust the height.

Pro-Ject uses carbon fibre for the arm tube, which means it is light, rigid and well damped – perfect for keeping the cartridge steady.

This turntable is the exact opposite of a plug-and-play machine. It is for those who cherish tinkering with every aspect of their record player, from setting the correct counterweight and bias to manually operating the arm.

But don’t be daunted if you’re a complete vinyl newbie: Pro-Ject includes detailed instructions in the box to guide you throughout the entire set up.

Remember to look up the exact details of the cartridge, as its tracking weight will affect the counterweight and anti-skating force you have to set.

Don’t lose the stylus guard either – you’ll want to keep that expensive, diamond-tipped cartridge protected when not in use.

There are plenty of extras included in the box, too, such as four different counterweights, a pair of RCA cables for plugging the turntable into a phono amplifier, a spirit level to make sure everything is perfectly level, and a removable dust cover.

The controls are simple, with just one button for switching between 33.3 and 45rpm and to put the turntable into standby mode. A single LED indicates when the turntable is in the correct speed (blue) and will go green when the motor stops.

Some may want separate buttons for each function, but we found it easy to get used to. We’d take care with where positioning the Pro-Ject turntable in your listening room.

A sturdy rack is a must if you want the best performance, and we’d recommend keeping it separate from any other equipment to prevent unwanted vibrations affecting it.

And finally, don’t forget to put the record clamp on. Playing a record on the Perspex without it makes the sound rather insubstantial and lacking in punch.

Screw the clamp on, and you’ll be rewarded with a more solid sound.

We start with a recording of Shostakovich’s Symphony No. 1 in F minor (Op. 10) and it's clear that the Pro-Ject turntable has a refined, elegant sound.

The opening exchanges between trumpet and bassoon are playful and just a little bit menacing, and the Pro-Ject 6 Perspex SB delivers each note with utmost clarity.

The melody is sprightly, with plenty of space surrounding the solo instruments.

As the orchestra sweeps in, we think the effect could be just a bit grander: the strings should sound strong and powerful, and instead they seem a tad reticent through the Pro-Ject.

But there’s enough detail and engagement to keep us listening. The extent of the Perspex’s detail definition shines through when we play Michael Jackson’s Billie Jean. The chunky bassline is taut, deep and full of texture.

The intro notes sound pristine and authoritative, but this Pro-Ject turntable can’t quite put the sense of build-up across – almost like it’s stuck in a loop, rather than building the anticipation.

We want the Pro-Ject to be more engaging and pull us into the music. Drums hit with a decent smack, although a touch more conviction wouldn’t go amiss to really make those notes have a forceful impact.

We can’t help but feel that this Pro-Ject Perspex is too polite with its delivery. Switch to Nick Cave’s mellow, mournful singing on The Boatman’s Call and you can easily get lost in his voice.

But that inherent good taste once again takes away that last smidge of expression and raw emotion.

Notes are produced with precision and clarity but better record players deliver a little more.

What we criticised in the original 6 Perspex – the degree of excitement and verve – rears its head once again.

The Pro-ject isn’t fundamentally flawed in any particular area; it’s more a case of missing out on tiny degrees of subtlety, agility and dynamism.

The 6 Perspex SB gives a highly-accomplished performance, but one that we can’t quite fall in love with.

Don’t let the lack of that fifth star deter you from enjoying the Pro-Ject 6’s accomplishments.

This is a sophisticated turntable, both in sound and build. We love the design and clever magnetic suspension system, and the hands-on approach will be a huge part of its appeal.

It’s a pricey proposition, but we’d urge you to give it a whirl.