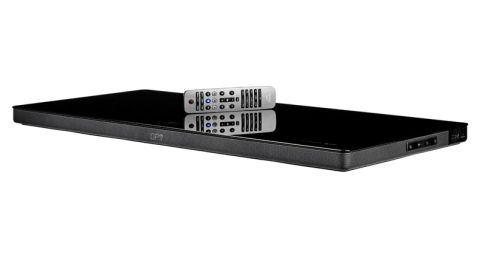 An innovative design that gets the soundbase basics right

Divide and conquer. That seems to be Philips’ tactic when it comes to soundbars. Take the Award-winning HTL9100 from a few years ago, with side speakers that detached and doubled up as wireless surrounds.

Now we have the Philips Fidelio XS1 soundbase, and it looks like the company has taken a similar approach. This one doesn’t come apart or transform, but it does have a wireless subwoofer that you can stick under the sofa (if it has a clearance of at least 9cm), or behind it – not too close to a wall though.

The point is to hide the bulk of the system, which means your TV gets to sit on something that doesn’t have the appearance or heft of a tombstone. That way you get to have a substantial sound as well as slimline looks.

As soundbases go, it’s sleek. Metal and glass, plenty of class, and only 4cm high. It’s sturdy too, Philips says it can comfortably hold up 44kg, and it looks and feels every penny of that £500 price tag.

It is well-specified too. Many soundbars and soundbases come with only a digital optical input, with the idea that you plug everything into your TV, and then boost your sound with a single cable. Not so with the Philips Fidelio XS1.

On top of the digital optical input, you get digital coaxial in, HDMI in and out, plus a 3.5mm output for headphones. Then there’s the USB 2.0 port, for memory sticks containing MP3 and WMA music files.

You also get aptX Bluetooth, with NFC (Near Field Communication) for speedy pairing.

Set up is a painless process. The soundbase and subwoofer require separate mains power. Once plugged in, you could pair them manually, but we didn’t have to as the automatic connection worked flawlessly. A dimmable dot matrix display at the front does a good job of indicating which input you’ve selected.

Before you start listening, we would advise turning off Auto Volume Leveller and Night Mode. Those settings may keep your neighbour happy, but they restrain the dynamic range. We’d also suggest turning the bass way down, because when you’re sitting right above a subwoofer, you really don’t want it any higher than the -5 setting.

It’s time to get cracking, and few films do that like Captain America: The Winter Soldier on Blu-ray. The audio performance is a mixed (but mostly positive) bag, and we are seriously impressed by the integration between soundbase and subwoofer.

At no point did we feel we were listening to two separate components – which cannot be said for many such systems. Whether you’re watching a conversation or a gunfight, there is no perceptible lag or miscommunication.

The subwoofer works well. Bass weight is never an issue. You get plenty of it, and it goes down deep, with the sort of rumble that occasionally and momentarily makes you fear for your safety. At the top end the sound is clear and rounded, never sounding shrill even when you crank up the volume.

The midrange suffers, a bit though. We like a direct, open midrange but here it’s a bit recessed.

Then there’s the matter of dynamics. It’s an impactful performance for sure, and things kick up a notch when lips stop flapping and bullets start flying. But the Philips struggles with subtlety and wide dynamic shifts don’t come easy.

Voices don’t carry as much emotion as they should – when Samuel L Jackson doesn’t sound angry, you know something is amiss.

We compare the Philips to our favourite soundbase of around £500: the Geneva Model Cinema. That is a one-piece unit that makes no attempt at Philips’ slimlining – nor does it have the low-end heft – but its performance is more faithful and more rounded.

It comes down to features versus performance. If you’re after outright performance, the likes of the Geneva Model Cinema make a more compelling argument.

If you’re willing to trade some of the audio quality for features, connections and streamlined looks, the Philips Fidelio XS1 is spot on.