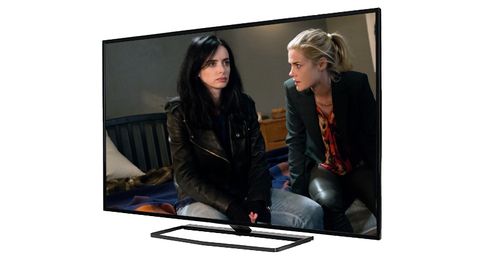 Though equipped with all you’d expect from a modern 4K TV set, Philips has failed to hit the spot with the 55PUT6400

Eighteen months ago, when we tested the Philips 55PUS7809, we were astounded to discover you could pick up a 55in 4K television set for £1500.

Okay, so the company’s latest offering, the 55PUT6400, is far from the only affordable Ultra HD telly of this size on the market but, in terms of specifications at least, it is still a healthy return on the money.

Essentially, it is all you’d expect from a TV in 2015: a trim and trendy box with built-in Freeview, on-demand and catch-up services and a plethora of apps for music, gaming and social media. Then you’ve got four HDMI connections and three USB for anything else you want to input.

Once you have been guided through an initial set-up, the home screen is much as you’d find on any other Android OS-powered TV.

In that sense it’s rather simple to navigate and, driven by Philips’s Dual Core processor, it all moves rather fluidly. No complaints as yet.

There’s much to be said for the initial picture quality, too. We turn off features such as dynamic contrast (which we find a touch heavy-handed if you have it past minimum setting) and natural motion to find a picture with a good amount of basic detail on both high- and standard-definition channels.

Outlines are crisp, and sweeping landscapes as you find on programmes such as Escape To The Country are represented well.

Watching the incredible Ice Road Truckers on Dave’s standard-definition channel, we are impressed by the Philips’s handling of movement too. That improves, much as you’d expect, when shifting to high-definition channels or Blu-ray.

Testing the latter with the excellent documentary, Pink Floyd: The Story of Wish You Were Here, the sound, by the standards of modern televisions at least, is relatively expressive as well and doesn’t really want for detail or punch.

So where is this telly losing ground? Subtlety, mainly. As always, we start our fine-tuning by using a THX calibration disc. While most of the tests are fine, we struggle to get the flexibility we’d like from the brightness and contrast.

That leads to a lack of detail in the brightest and darkest areas of the picture, especially when they are in the background. Bright lights and the walls to which they are fixed become indistinguishable, almost garish; creases don’t show up on white shirts or dark trousers; walls are built with indeterminable material.

These are the kind of details you notice straight away, even if you aren’t drawn immediately to their absence.

That leads us to the question: how long is too long to be fiddling with the settings of your new £750 telly? We don’t time ourselves but it is more than an hour of tweaking and experimentation, and we still can’t attain the level of subtle detail we’d like.

That, combined with the time it takes to do things such as change channel or load the TV guide, makes the 55PUT6400 feel a bit sluggish and blunt.

The good news is that these things are, feasibly, rectifiable with a software update – Philips has assured us that there’s one coming to solve issues with the temperamental BBC iPlayer – and don’t completely undermine the set’s strengths.

For the moment, however, we are still a little way off recommending this TV to our family and friends.

See all our Philips news and reviews