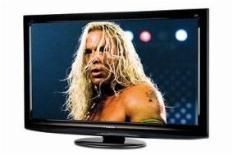 A competent all-rounder; a good shout for those looking to make the leap to 3D

Until now, Panasonic's 3D TVs have been rather large. Early adopters had a choice of either a 50in or 65in screen, very large for the average UK living room. The company now has some smaller 3D sets at its disposal, starting with the 42in TX-P42GT20 plasma.

It boasts its fair share of features and sockets for the money. Four HDMI inputs, Freeview HD and Freesat tuners, THX certification and a 3D Image Viewer (so you can look at photos taken with a compatible 3D camera) are all included.

As is Panasonic's Viera Cast service, which provides content from external partners such as You Tube and Ace Trax.

Integrated 3D sender
For those wanting to get stuck straight into 3D, Panasonic includes two pairs of its TY-EW3D10 glasses with the set, while the transmitter that sends 3D images to them is, handily, integrated into the TV.

Watch the 3D Blu-ray of Cloudy With A Chance Of Meatballs and it looks colourful, crisp and clear.

The glasses aren't the most comfortable design, but tilt your head and the picture remains stable with little sign of the dreaded crosstalk that can affect some 3D LCD screens. Images don't quite have the vibrancy, punch and wow factor of some rivals, but they're still immensely enjoyable.

2D performance via Freesat, Freeview HD and Blu-ray is of a similarly pleasing standard. Colours are rich and vibrant, although there's a touch more flicker during tricky panning shots than with some rivals.

Black levels are accomplished
There's been a heated discussion on the whathifi.com forums relating to black levels on Panasonic's latest sets, especially with standard-definition content.

Here, black levels are accomplished, but in certain dark scenes, on some picture modes, our review sample did display a sudden shift in contrast. It seems automatically to adjust the picture on the fly.

We didn't find this a massive distraction, though – and switching to the TV's ‘Cinema' picture stopped it altogether. Sound is, for a TV of this type, surprisingly substantial.

This Panasonic isn't perfect by any means but it's still an attractive proposition and it works well as a 3D-compatible package.