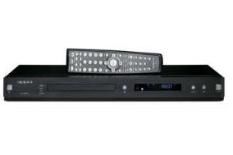 Oppo's DV-980H player is a fine DVD all-rounder; the upmarket DV-983H is a victim of that machine's success, the Blu-ray invasion and the plummeting pound

If anyone wonders why we're facing price-rises in the consumer electronics industry, here's one answer: a few months back, when it first appeared in Europe, the Oppo DV-983H would have cost you around £280.

But being priced in Euros where it's sold, in the company's online shop, means the tag is now getting on for £100 more, thanks to the pound's plummeting value against the European currency.

That doesn't do the Oppo any favours at all, especially when the price of good Blu-ray Disc hardware, also able to upscale DVDs to 1080p, is seemingly falling almost as fast as Sterling (even if one has to ask for how much longer this can go on, thanks to those same exchange rate problems).

Blu-ray players offer fierce competition
Under £200 will buy you a very good BD machine these days, meaning that the Oppo looks rather out on a limb in the home cinema source market, 2009-style.

In its favour it offers a similar specification to the less expensive DV-980H, which we rather liked: it's multiregion out of the box, will play DVD-V/DVD-A/SA-CD/CD and a variety of compressed music formats, and has the advantage of being able to deliver SA-CD sound in its native form, DSD, over its HDMI output to a suitable multichannel amp or receiver.

To the 980H specification this model adds a slightly revised control layout, and an enhanced video processing system, claiming even better upscaling.

The 983H uses the Video Reference System from digital processing specialist Anchor Bay, the supplier of such video technology to upmarket hardware from the likes of Arcam, Denon, Marantz and Yamaha.

Images have bags of definition and detail
That gives this model a wider range of picture adjustments, but the downside of this machine is the frankly cheap-looking menus you have to negotiate in order to get the best out of it.

For all that motion is admirably smooth, and images have bags of definition and fine detail even down in the deepest of blacks.

The sound, too, is particularly good, the player really shining when you load up a well-mastered SA-CD and send the sound via HDMI to a suitable receiver. As an SA-CD transport, the Oppo is up there with some of the very best.

However, SA-CD doesn't trouble the majority of buyers these days, the player is up against the Blu-ray invasion, and of course those exchange rates have done it no favours whatsoever. It's good, but a bit of an orphan, really...