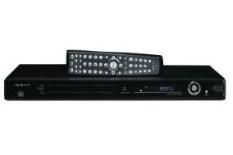 You can pay less for a DVD upscaler this good, but the Oppo’s extras will ensure its appeal for some

The world's not exactly short of upscaling DVD players – you can buy one for £50. So anything costing much more had better tick a few boxes of interest to stand out from the pack.

The DV-980H, from Californian company Oppo Digital, makes a great first impression on emerging from the box by being a remarkably slim – it's just less than 5cm tall – universal machine. It's equipped to play SACD and DVD-A audio, and you can get hold of one for 198 euros (approx £160) delivered from Oppo's online shop in Sweden www.opposhop.com.

It has one attribute that sets it apart – it can deliver native direct stream digital (DSD) audio from SACD over its HDMI connection. Provided you have a receiver able to accept DSD (we used the Onkyo TX-SR875), it's a very attractive prospect for SACD devotees.

Great for upscaling and music
The Oppo is very good indeed as a cost-effective 1080p upscaler or as a music machine. Images are sharp, well detailed and free from noise , and if you have a mid-range TV of up to 42in or thereabouts, you'll find this is an excellent partner.

But it's the musical ability that sets this player apart. Like most machines of this kind it's merely adequate when playing CDs out through its analogue sockets; but it really shines when hooked up to a DSD-capable receiver and loaded with some good SACDs.

An oddball – but a fine spinner
To put it through its paces, we played some of the latest Linn Records releases through it, and it impressed with the depth, scale and detail of its sound, and the sheer musical flow on offer.

It's a bit of an oddball choice, this Oppo – it even has a USB 2.0 socket for playing files stored on portable devices – but if you're captivated by the idea of its SACD capabilities, you won't go far wrong here.