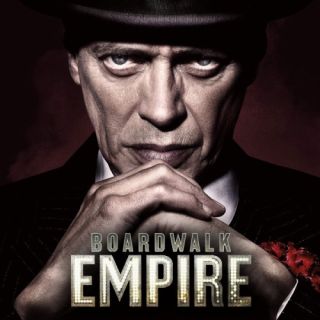 We start the week by returning to Atlantic City with American gangster TV show Boardwalk Empire. Series three picks up the pieces of season two's bold and surprising ending (no spoilers here!). But, obviously, Steve Buscemi's Nucky is still up against it with crime bosses and tussling with politicians getting in the way of his ever-expanding crime organisation.

This week also sees Danny Boyle's trippy, strange and sometimes confusing Trance make its high-def debut. Coming off his gig directing last year's Olympic opening ceremony, Boyle mixes the feel of his earlist films with the visual style of his latest. Filled with a great international cast including Rosario Dawson, James McAvoy and Vincent Cassel, expect to be counfounded and entertained all at once.

Never seen The Jungle Book? Never seen it in high-def? Well, here's the chance to catch up on one of the great Disney animated films. This release sees a new digital print of the film, with the sound and image spruced up. A classic.

Light Falls. This is the second episode of the original Channel 4 TV series. After the shooting spree in the first episode rocks the community, Light Falls sees reporter David Whitehead (Rory Kinnear, Skyfall) return to the town where he grew up in the aftermath of the attack.

Chicago. We're almost at the end of the second series for this American comedy. This episode sees Nick (Jack Johnson) suffer a bereavement, so Jess (Zooey Deschanel), Schmidt and Winston head to Chicago to organise the funeral. It's a poignant episode with some laugh-out-loud moments. It's worth it to see Deschanel dress and sing as Elvis. At a funeral.

Steve Coogan: Stand Up Down Under Sky Atlantic HD, 9pm

Norwich's favourite radio presenter is almost back in town. So what better way to get ready than to have a peek at the man behind the Partridge as he goes on tour in Australia and New Zealand. This is the first of a two-part documentary that concludes on Wednesday.

Four more celebrites make their way into the kitchen. This week, John "Cold Feet" Thomson, Denise "Corrie" Black, Ade "Bottom" Edmondson and Phillips "The Olympics" Idowu are all battling for a place in the second quarter-final.

Who Do You Think You Are? BBC One HD, 9pm

An interesting series that explores the history of celebrities' families. This one features Hollywood actress Minnie Driver on a mission to find out more about her late father, Ronnie. An illuminating watch.

5/1. Always hectic and full of wry moments, the latest show from from Aaron Sorkin (The Social Network) takes real-life stories and views them from a slightly different perspective. 5/1 sees the news staff's anniversary party cut short when they learn the President is about to address the nation on a matter of national security. Season two starts in September.

The fourth Major tees off.

Features Guillermo Arriaga, writer of 21 Grams and Babel, as he explains his motivations and theories for writing films. This is a must-see if you're interested in what happens before the cameras start rolling.

The Man Who Made Us Thin BBC Two HD, 9pm

The first in this four-part series sees Jacques Peretti investigate the connections between obesity and weight loss. It features interviews with a former director of Weight Watchers and other industry leaders, such as Slimfast billionaire Danny Abrahams and Pierre Dukan, of Dukan diet fame.

The Ashes Fourth Test Day One Sky Sports HD 2, 10am

The penultimate test starts in Durham. With the Ashes already lost, the Aussies are now fighting for at least a series draw.

With Alan Partridge: Alpha Papa on the big screen, witness Steve Coogan's alter-ego produce his brand of cringeworthy humour on the small screen. This is the first of the six episodes in this season (the second airs straight afterwards). If you're a fan of the Partridge, you'll certainly want to see this.

By now female buddy-cop movie The Heat will have been out for a week. So it's an ideal time to rewatch director Paul Feig's previous film, the hilarious Bridesmaids. Kristen Wiig is Annie, an out-of-work pastry chef who's asked be a maid of honour for her friend Lillian (Maya Rudolph).

However, the wedding couldn't have come at a worst time. Annie's life is beginning to unravel, and she faces competition from Helen (Rose Byrne) to be Lillian's best friend. Also stars woman of the moment Melissa McCarthy.

A Little Reflection. Everyone's favourite pyscho is back in the fold with A Little Reflection marking the half-way point of the final series. In this episode Dexter monitors a young pyschopath to see if he is suited for his table. It can't – and most probably won't – end well.

Suited and rebooted, The Amazing Spider-Man sees Andrew Garfield don the unitard. Spidey is up against Rhys Ifans as The Lizard and also has to contend with his high school crush Gwen Stacy (Emma Stone). The big issue with this film is, how does he fit all that hair in the mask? It's an enjoyable enough retelling of the origin story, but perhaps one that wasn't all that necessary with Sam Raimi's original having set up the mythos well enough.

See you next week...