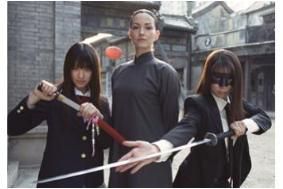 The New York Post reported Google to be negotiating with Filmyard Holdings, soon to complete its $600m purchase of Miramax from Disney.

The sale, which would see Filmyard taking control of the Miramax name, as well as its catalogue of movies, is expected to be completed in the next couple of weeks.

If Google gets the rights, it would be able to stream titles such as Kill Bill, Pulp Fiction and No Country for Old Men, along with other titles including The Queen, Trainspotting and Muriel's Wedding.

Any such deal will greatly bolster its current online movie rentals offering, which is very limited, and has seen Google in talks with companies including Sony Pictures and MGM, according to the Post's sources.

But it's thought the company many not have a clean run at the Miramax deal: US online film distributor Netflix is also thought to be taking a close look at the catalogue.

The Hollywood studios are known to be keen to have more of their content available online for streaming, but are wary about the ability of such services to deliver a revenue stream in return.