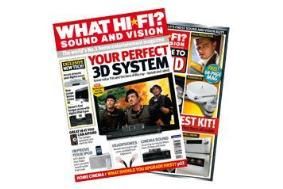 If that's not enough to whet your appetite, turn to or First Tests section for a plethora of hot new reviews.The section kicks off with Panasonic's much-anticipated Viera TX-P50VT20 3D plasma TV, and also includes new screens from LG (47LX9900) and Sony's 3D Bravia KDL-46HX903.

On the stereo electronics front, we've tested a budget CD player from Cambridge Audio in the shape of the £230 Azur 350C, Arcam's Solo Neo and Denon's replacement for the D-M37DAB micro system, the D-M38DAB.

If you're thinking about upgrading your home cinema system, then you can't afford to miss this month's Big Question in which we ask: "Which part of my home cinema system should I upgrade first?" Should it be the Blu-ray player, multichannel amp or surround speakers? Three readers decide.

And don't forget we've got ten pairs of lovely Q Acoustics 2050 floorstanding speakers to give away in this month's competition.

So there you have it: a bumper issue of What Hi-Fi? Sound and Vision, plus free 68-page Ultimate Guide to High End, on sale now. Don't miss it!