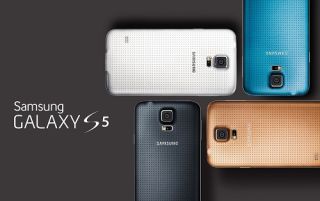 The Samsung Galaxy S5 was finally unveiled at MWC 2014 in Barcelona at its Unpacked 5 event.

Samsung confirmed the Galaxy S5 release date, as well as revealing the key new features which it will hope see the new flagship phone build on the success of the Galaxy S4, which has sold in excess of 40 million units since April 2013.

Here's everything you need to know about what might just be the best-selling smartphone of all time, from the specs to how the S5 compares to the S4.

Samsung announced at the official unveiling that the new Galaxy S5 would receive a global release on April 11th.

No official pricing has been detailed just yet, but a leak on Amazon's Spanish website could be a potential lead.

The site lists the smartphone at €729, which converts to around £600. Expect the Galaxy S5 to cost around this for the SIM-free version. Anything less is likely to be a bonus based on previous pricing.

Of course, the Galaxy S5 will be available on a wide range of UK networks, with EE, Virgin and Vodafone quick to confirm the new mobile would be coming to their networks.

Virgin Media attempted to steal a march by confirming it would come with inclusive insurance but further pricing information is yet to be announced.

The Samsung Galaxy S5 was rumoured to come in both plastic and metal finishes. Unfortunately, this didn't come to fruition, Samsung has opted to stick with a plastic-build for its flagship device.

It features a soft-touch polycarbonate back panel with a dimpled effect, for a touch of variety.

Design-wise it very much resembles its predecessor; the Galaxy S4. It's only a few centimetres bigger but otherwise it appears to be much of a muchness.

Many of the rumoured specs came true for the Galaxy S5.

A 2.5GHz Snapdragon 805 processor lies under the hood, with 2GB of RAM, so we expect the S5 to be pretty nippy - though that hasn't always been the reality, with some lag issuse on previous models, not helped by bloaty software.

Samsung didn't introduce 64-bit architecture into the S5, as many people predicted. The firm will likely save this for the next iteration.

It will come with a 16-megapixel camera with LED flash and advanced HDR mode for post-shot refocusing. Samsung also claims the autofocus is the fastest of any smartphone at 0.3 seconds.

The Galaxy S5 will be available in 16 and 32GB variants, with a microSD card slot for expandable storage up to 128GB. A removeable 2800mAh battery will power the device which Samsung claims offers up to 21 hours of talk time.

4G LTE connectivity is also onboard, along with a feature called Download Booster; this combines wi-fi and 4G to theoretically download files a lot quicker.

Samsung has fitted the Galaxy S5 with a fingerprint sensor, much like the Touch ID found on the Apple iPhone 5s.

Samsung seems to have made good use of the feature however, giving it three functions: unlock the phone, authorise online payments, and protect files with a Private Mode that requires a fingerprint to unlock.

Samsung, which likes to be a company of "firsts", has fitted the S5 with the first heartrate monitor to be found on a smartphone. This will tie in with Samsung's S Health app.

Much like the Sony Xperia Z2, the Galaxy S5 will be dustproof and waterproof

It will also, as expected, come running Android 4.4 Kit Kat with Samsung's own TouchWiz UI over the top. Many predicted/hoped it would use a similar Magazine UX found on the Galaxy NotePRO tablet. It seems, this isn't the case.

And that's it, the Samsung Galaxy S5. Perhaps not the innovation many were expecting. With the likes of the Sony Xperia Z2 unveiled to much fanfare, and the new HTC One and iPhone 6 expected to be released later this year, Samsung's smartphone crown may not be safe for 2014.

What are your thoughts? Let us know in the comments box below.