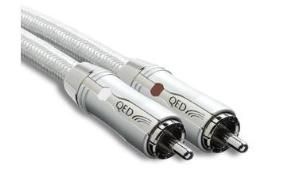 It's now deteremined to rectify the situation with the launch of its flagship £190/m Signature Audio S analogue interconnect.

It's the first of a new range of "no compromise" cables, says QED, which will be expanded to include digital audio, analogue video, HDMI and dedicated subwoofer variants.

QED brand manager Phil Davis says: "We let the design team off the leash and simply told them to design a truly great cable, one which would successfully compete against any other cable, irrespective of price."

The result is a design deploying six conductors in a twisted, quasi-balanced geometry for both signal and return, resulting in a "significant reduction" in magnetically induced distortion, claims QED.

The cable's silver plating is intended to provide an improvement in resistance at the periphery of the conductors, and "voltage spike induced noise rejection" is achieved by the use of a tightly woven outer shielding braid and aluminised Mylar wrap, which are said to provide a 100 per cent electrostatic screen.

And we've a test of the new QED Signature Audio XT interconnect (£150/m) in the March issue of What Hi-Fi? Sound and Vision, on sale tomorrow (February 12th).