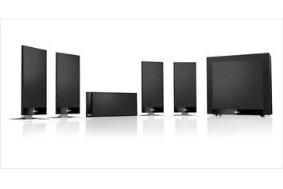 You can see and hear KEF's new super-slim T Series here at Manchester, and find out more about them in our video news report. We hope to get them in for review soon.

The new drivers sit within 35mm deep cabinets that KEF claims will perform as strongly mounted on a wall as on the proprietary stands thanks to an innovative crossover design.

Crossover components are hidden inside the stands themselves ensuring sound is adjusted for optimum performance when the speakers are stood in free space.

The T105 system is the first of three systems scheduled for release, and comprises four T101 satellites, a T101c centre channel and a slim profile T-2 subwoofer.

The T101 satellites include one 25mm vented tweeter and one 10cm low frequency driver.

KEF has developed the closed box design T Series from work on the company's Concept Blade speakers and aimed for an output capability equivalent to the KHT3005S.