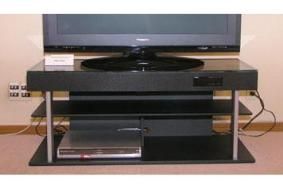 This is the Yamaha YRS-1000, just about to hit shops in Japan, and due in the UK early next year. It's an all-in-one TV stand surround system, combining tthe company's expertise in single-source soundbar systems for surround sound with design inspired by Yamaha's music instruments.

Behind the soundbar unit, which is ideally placed just below the TV, is an active subwoofer, and the system has full compatibility with the HDMI-CEC control protocol, for example making kit possible to operate the basic functions of a complete system with the remote control supplied with a compatible TV.

Yamaha demonstrated the unit to us with a Panasonic TV and recorder, but confirmed that it had tested functionality with the HDMI control systems of six other brands.

The HDMI inputs and outputs are also designed to make connection and set-up simple, Yamaha identifying this as one reason some people shy away from home cinema, and the system also has microphone-based automatic calibration.

The YRS-1000, which is 1.15m wide, is being launched as part of a revamp of the company's Sound Projector range, which will see some existing models replaced over the next few months. A larger version of the stand, the 1.6m-wide YRS-2000, is also on the way.

But the version of the YRS-1000 we will see in the UK will look a little different from the one you see here: the domestic model stands 40cm tall, but the Yamaha engineers reckon we tend to sit higher than Japanese TV viewers, so the height will be increased to 50cm for export models.