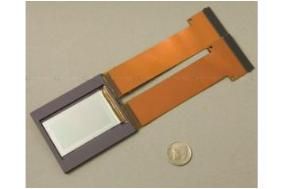 JVC's new D-ILA boasts a 5500:1 contrast ratio, employs a triple D-ILA display system (lens pictured above) that makes it possible to render video in a resolution of 35 megapixels.

Despite the ridiculous-sounding image specs the D-ILA also has a sensible side. JVC claims that the projector could save you up to 50% in power consumption and 60% in lamp cost thanks to its 'adaptive pixel correlation technology'.

The projector uses a solitary 3000-watt lamp to generate a claimed 10,000 lumens brightness. All you'll find on the main unit is a power button – all the other controls will be accessed via a networked PC.

Surprisingly there's no word yet on being able to buy this projector, let alone how much it might cost, but we'll keep you posted as company's such as JVC look to push the home cinema boundaries...