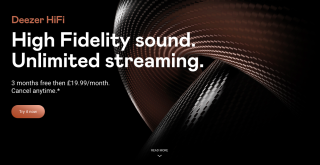 Fed up with low-quality music streams on your mobile? Good news - Deezer's FLAC-quality HiFi tier is now available on the go.

Previously limited to the desktop software, Deezer HiFi's 52 million lossless tracks can now be listened to via the iOS and Android mobile apps.

Worried about getting a good signal in a packed train carriage? You can download the tracks and listen offline. More importantly, the service is ad-free so your crystal-clear, 16-bit listening sessions won't be interrupted by jingles for washing powder.

The French company claims that it's seen a 45% increase in subscribers to its HiFi subscription tier, which includes access to '360 Reality Audio' tracks – the firm's proprietary 'spatial sound' tech – via the standalone 360 by Deezer app.

According to Deezer: "If you turn on HiFi and close your eyes, it’s like you’re in the studio with your favourite artist. Having Deezer HiFi on mobile and web means you can always feel this, even if you’re on the go.”