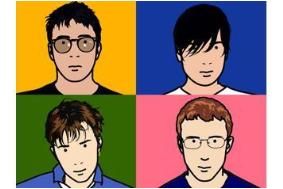 The band released 1000 copies of the song on 7in vinyl on Saturday, as part of Record Store Day (aimed at supporting the UK's remaining 300 independent record shops).

Today, copies of the limited edition record are selling on ebay for Buy It Now prices of between £145 and £175.

Blur also released a free digital copy of the song on its website, but it's the vinyl version that has attracted collectors.

As for the digital download, Blur's manager, Chris Morrison, says: "To avoid fans having to illegally obtain an inferior copy of this track from pirate sites, we have made it freely available through the band's website."